The 90s. A decade that was painted into blue color, at least when volleyball is concerned. However, that 1996 was not blue. It was orange…. 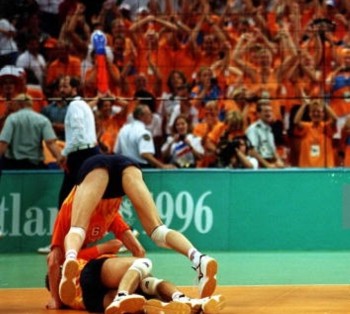 Of course, we are speaking about the legendary final between Italy and Netherlands at the Atlanta Olympics 1996.

Despite being definitely the best volleyball team at the time, Gardini, Bernardi, Giani and Co. just could not win the Olympic Games. In 1992 they lost against the Netherlands by 3-2 in the quarter finals, while 4 years later in Atlanta, Italy reached the finals. And the opponent was the old rival – The Orange crew of Netherlands!

At the same time, the Netherlands were “The Silver Team”. A nickname that clearly suggest that the Dutch squad was constantly losing the finals. They got defeated by Brazil in the gold medal match at the Barcelona Olympics 1992. While they lost plenty of finals against Italy, including European Championships 1993 and 1995, then World Championship 1994, World League 1990. Still, the Orange crew did manage to defeat Italy in the World League 1996 Finals, which occurred just one month before the famous Olympic Finals at Atlanta 1996.

The Netherlands had the first match point at 14:13, but Italy turned the things around and took the lead at 15:14. The Netherlands tied the score at 15:15 and then won the following two points – 17:15!

It was the first time ever that the Netherlands won the Olympic gold, while Italy has never managed to break their Olympic curse and to reach so desired gold medal.

TUR M: These players are staying in Halkbank!

ITA M: Lorenzetti – “We are disappointed”