Winning the 2017/18 Italian men’s volleyball championship SuperLega title changed the way of thinking of both Ivan Zaytsev and Gino Sirci in regard to the status of „The Zar“ in Sir Safety Conad Perugia. 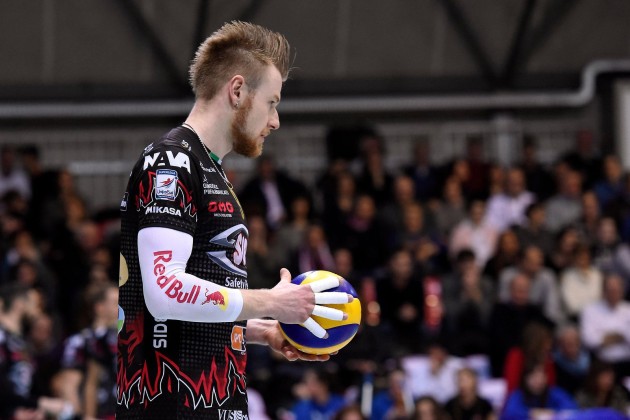 Two months ago, Perugia president Gino Sirci stated Zaytsev will leave the club. A month ago, the player himself blamed Perugia for ending collaboration.

Now, after winning the first-ever Scudetto, things have obviously changed in Perugia. The statements of both Zaytsev and Sirci, which they gave at the end of Game 5 of the playoff finals vs. Cucine Lube Civitanova, showed it unequivocally.

„My story with Perugia might continue if the president wants it. It’s all in his hands. As I already said, it does not depend on me. I expressed my desire to stay long ago. The ball is in his hands,“ Zaytsev said for TG RAI Umbria and iVolley Magazine transferred.

„A month and a week ago, Zaytsev said he was thinking of staying in Perugia. We have seriously begun to make changes in the team. He had said four or five months ago that he wanted to play as an opposite, therefore, now that he has said that, we are seriously thinking about keeping him. We just have to find an economic agreement. Our will is to keep him, and it is a matter of a few thousand euros. I think we will find the agreement this week to make him stay because the most famous face of an Italian volleyball cannot escape from Perugia,“ Sirci stated in a studio after winning the national title.

Many clubs were mentioned as Zaytsev‘s new destination for 2018/19 but only one, allegedly, started to negotiate with him.

I hope emotion is not the driving force behind this decision. It would be one with +/- effects.
The positive is you add depth at the Outside and Opposite positions and are able to rest guys like Russell and Leon and Atanasijevic , as Zaytsev can play opposite. You also add firepower and experience from the service line. This could extend the careers of the guys who do a lot of summer work for their National teams and less wear and tear on their bodies as the seasons are getting longer and more intense. You have another Italian on your roster to offset so many foreigners
The negatives are possibly egos as you have strong personalities all wanting to be ‘the guy’ . Someone has to sit , especially big matches. The club budget will be seriously strained and the demand for travel, housing, luxury that the club will need goes up.
If success is not constant it could blow up internally. Guys like Leon, Russell and Atanasijevic are already better than Zaytsev was at this age and will only improve as they are 5 and 6 years younger. Zaytsev is still a tremendous talent and weapon but he is not going to improve significantluly anymore (People need to understand that) .
$$$$$$

This is interesting, if Zaytsev stays he will probably again be playing as receiver since Atanasjevic is staying as well and has proven to be extremely valuable for his team.

Taking into account that Perugia will also hire Leon that would mean that Russell has to go to the bench since there can only be that many foreign players on the field in the Italian league.

Moving Zaytsev to the opposite just wouldn’t be an interesting option. Atanasjevic has a lot of built up credibility from all those years and Zaytsev hasn’t played as opposite for over a year now. Why let 2 top players fight over a single position when you can successfully utilise them at the same time?

Zaycev wants to be Hi-Man and that’s some spoiler. Since, his serve is more in the net than not. He might be mascot but some Kovacevic would be easy to replace him for much less money. If he wants to.

Too many cooks spoils the soup!