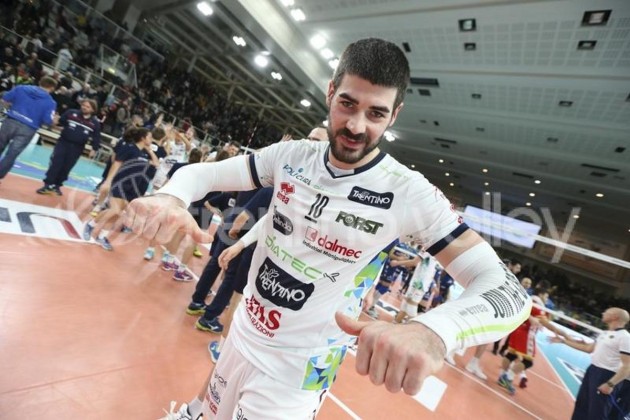 A 27-year-old player has established himself as the icon of Diatec Trentino since he has been wearing their jersey for the last seven seasons and three more in the youth team.

A 2016 Rio Olympics silver medalist will form a starting outside hitter’s duo in Perugia with another big signing, the Cuban Wilfredo León, who will be presented to the public on June 9.

Much needed and anticipated transfer for Perugia to fill and Italian spot on the starting roster. It had to happen.
Now Perugia can pay Russell’s full salary to play part time or release him or trade him.
This opens the door for Trentino to land the Star player……and now Modena which would be a massive catch if they can afford him. Apparently Modena still has room for a foreigner on their roster

Re: @suisse i hope modena will get him…he is a star and young…

Re: @Jst
I only know they have an opening for 1 more foreigner and if they could afford him that would be incredible with Christenson, Zaytsev, Holt. Wow!
Trentino is the logical place and they apparently have wanted his services for years. This would be a huge get for Trentino and one to build on for years as he just turned 25.
The Asian offers are very $$ apparently and that is tough to turn down .
The Italian league looks incredibly exciting and intense this year.

I will be very much surprised if Russell ends up in Modena. To Trento, on the other end, if they can afford it… Mosna and Sirci are fast friends.

Trentino is definitely the loser this year. I feel sorry for Lisinac and Grebennikov who signed with Trentino, it seems they made the bad choice unless Trentino got some surprise in their sleeves. They need an opposite and an outside hitter. Not sure whether Djuric will be healthy but he would be the good choice for the opposite. All first class outside hitters are taken already.
If Gianelli leaves as well, the future will be grim to Trentino

So Wrong. Trentino will compete for the top 3 spots in A1. Russell is a massive pickup for them. Very smart and consistent organization.

All the pressure is on Perugia with its investments.

Trentino is the level below Perugia, Lube, and Modena. Kovacevic is not the top player like Leon, Leal, Juantorena, Russell. Trentino needs one 1st class outside hitter, 2nd middle blocker, and opposite to become a serious threat to Perugia, Lube, and Modena.
Djuric went to Greece so his prime time is over. I don’t see anyone Trentino can sign to become a championship contender.

Trentino is not signing anybody new as opposite, they will play with Vettori and Nelli (he’ll come back from Padova).

Another victory for Mastrangelo