The annual General Assembly of the Balkan Volleyball Association (BVA) was held this Saturday in the capital city of the F.Y. Republic of Macedonia with CEV Senior Vice President Aleksandar Boricic and CEV Vice President Jan Hronek in attendance as representatives from 10 countries got together. This and other volleyball news read on Worldofvolley.com. 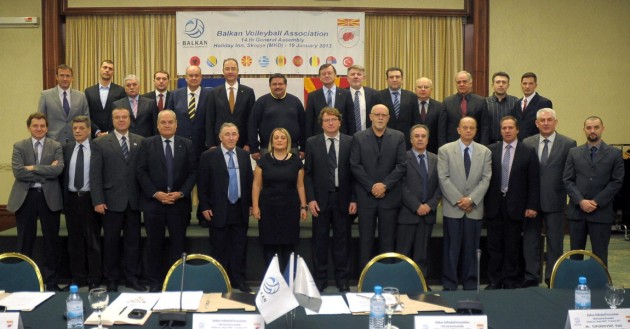 The President of the National Olympic Committee, Vasil Tupurkovski, deserved a very warm welcome to the Volleyball family there in Skopje. The Assembly elected Gheorghe Visan (ROU) BVA Chairman for the current year, while Artur Romascan of Moldova was sworn as Vice President.
The General Assembly represented a unique opportunity for reviewing and assessing the past season and the many competitions that were staged by the BVA for national teams as well as for clubs. Even though the Balkan region is being confronted with the effects of the international crisis, still Volleyball and Beach Volleyball did not stop their positive development also via the valuable support provided by the CEV and the FIVB.

Organizers for the various Volleyball competitions coming up in 2013 were also determined as follows:

As for Beach Volleyball, the Senior Balkan Championships will take place in Turkey and will be joined by pairs representing the likes of Albania, Bulgaria, Greece, Montenegro, Moldova, Romania, Serbia plus the hosting country.
The U23 Balkan Beach Volleyball Championships will be held in the F.Y.R. of Macedonia with teams from the hosting country set to test out the skills of pairs from Albania, Bosnia & Herzegovina, Bulgaria, Greece, Montenegro, Moldova, Romania, Serbia and Turkey.
Finally, the U20 Balkan Beach Volleyball Champs will take place in Albania with the local pairs set to be joined by competitors from Bulgaria, F.Y.R. of Macedonia, Greece, Romania, Serbia and Turkey; Montenegro is due to confirm its entry at a later stage.

The exact venues and the final dates of all competitions will be finalized this coming April in conjunction with the annual meeting of the BVA Technical Commission.

The next BVA General Assembly is scheduled for December 14, 2013 in Bucharest.