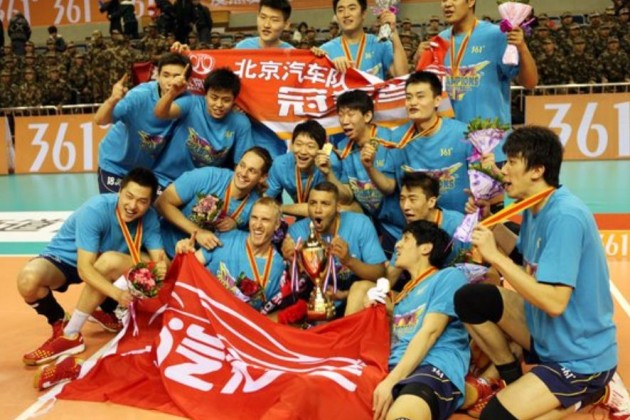 It is the first time Beijing has won the National League title and is the fifth team to clinch this top honour after Sichuan, Shanghai, Jiangsu and Zhejiang.

In the third and deciding match, the two teams remained close throughout the first set. Tied at 18-18, Salvador stepped up to break the deadlock, but Bayi responded with tough defense. With the hosts receiving superbly, Beijing’s powerful jump serves, especially by Salvador Hidalgo, helped break the deadlock as they won the set 25-21.

The two teams were neck and neck again in the second set. At 23-23, Beijing head coach Li Mu asked for a technical time out that seemed to produce the desired result.

Led by Hidalgo and Canadian international Fred Winters, Beijing intensified their attacks and blocking. Hidalgo was serving well while Bayi’s leading scorer Zhong Weijun lost his focus. The hosts found it hard to be consistent and Beijing went on to take the hard-fought set 29-27.

Beijing had an easier time in the third set and won it 25-18, clinching their first ever title.

“The jump serving by Salvador is so strong and fast that no Chinese player can match it,” said Li Haiyun, head coach of the Army.

Salvador commented: “The Army is a really strong team but we were full of confidence to beat them. Now our dream is realized and I am very happy and enjoying the victory.”

The champion was very special for Li Mu, who was named the league’s best coach.

FRA M: Lavallez – We are not demobilizing