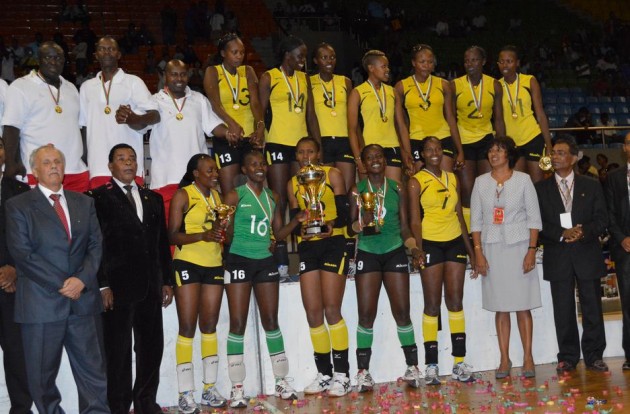 Prisons booked their fourth consecutive FIVB Club World Championship ticket after 2010, 2011 and 2012. They will appear again in the elite event to be hosted in Switzerland October 8-13, 2013.

Prisons added to their titles won in 2008, 2010, 2011 and 2012 with a final victory over Algerian side who, despite their obvious talent, had no answer to opponents playing at the top of their game.

The towering Bracksides Khadambi (Prisons) was literally head and shoulders above the rest of the players, as she played a great role in whole competition and in the final specially winning eventually the MVP prize.

GSP started early using the spike service of Fatma Okazi and Zohra Ben Salim to lead 8-6 at the first TTO after a group of disciplined attacks. Prisons improved their blocking through Bracksides Khadambi and Diana Khisa to come nearer till they lead for the first time 15-14 before GSP fought hardly in defence to regain the lead 16-15 at second TTO. The set went point by point there after till 20-20 when Prisons used the service and defence mistakes done by the Algerian team as well as the sharp spikes from Everlyne Makuto to win 25-21.

The second set featured tough start through the big fight in defence from both teams but GSP emerged in their tight defence to lead 8-6 at the first TTO. Safia Boukhima and Zohra Bensalem used well the proper setting to send their razor sharp spikes to score the crucial points giving their team a wide lead 16-9 at second TTO. Prisons fought bravely to decrease the point deficit to 20-18. Again due to the frequent reception and digging mistakes GSP won the set 25-20.

Prisons regain their concentration in service and defence to lead in the second set 8-6 at the first TTO. Makuto and Khadambi penetrated the Algerian defence regularly to advance 16-11. Bensalem and Boukhima sent their spikes to allow their team a transient come back as they decreased the point deficit to 18-16. Prisons setter Jane Wacu conducted her team with the skillful setting to win the set 25-19.

The fourth set showed early advance for Prisons who led at the first TTO 8-6 until Algerian setter Fatma Oukazi started her job to conduct GSP with the aid of Boukhima and Bensalem to win the set 25-19 and extend the match to tiebreak.

The tiebreak showed early compatibility till 2-2 when the Algerian team committed several mistakes to allow the Kenyan for a wide lead till they won the tiebreak widely 15-6.

Ahly started the first set aggressively as they put a pressure upon the Algerian team through the service and controlled the net through the centers Ingy Elshamy and Mona Adly. MB Bejaia improved the backline defence through the libero Nawal Masouri and thus Ahly led narrowly 8-7 at the first TTO. Ahly used the attacker Sherihan and Nahla Sameh to score a lot of points from position 4 to win the set 25-21.

The second set featured more dominance for Ahly team as they used the quick attacks in position 3 to deceive the opponent block. Bejaia coach fielded again the main setter Fella Rabahi who did well with the spiker Mame Ndiaye, so they decreased the point deficit to 18-16 before Ahly dominate the field to win the second set 25-19.

The third set started tighter as the Algerian team used their spike services to disturb Ahly team and they also used the attacks through the wings Fatma Djouadi from position 4 and Ladi from position 2 to lead for the first time 13-11 before Ahly re organized their block to lead 16-14 at the second TTO. Both teams struggled for each point till Ahly won the set 25-21 and the match 3-0.