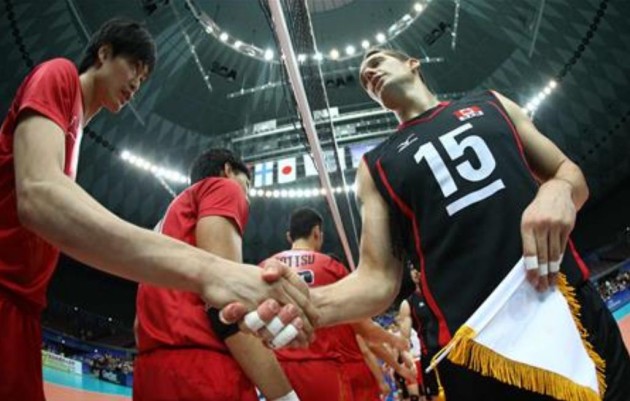 Canada rode their power game to victory, with their attackers pounding spikes relentlessly and their blockers playing strongly at the net.

John Gordin Perrin was the top scorer for Canada with 18 points. Dallas Soonias added 15 in the win.

Canada entered Saturday’s match still having a mathematical chance at advancing to the finals in Mar del Plata, Argentina, later this month. The Canadians (7-2) are currently second in Group C with 21 points, one behind leader the Netherlands. Canada have won five straight matches, including sweeps of Korea and Finland the past two weeks.

Japan are 3-6 following the defeat and ahead of only Korea at the bottom of the group.

Only one team from Group C advances. The Netherlands is scheduled to take on Finland again on Saturday.

Canada jumped out to a 4-0 lead in the opening set and Japan took a timeout. The Canadians kept the pressure on, boosting their lead to 8-0 at the first technical timeout. Japan got on the board with two quick points after the timeout to make it 8-2. Canada passed well and displayed good blocking defense in moving out to a 12-5 advantage. The margin was 16-6 for Canada at the second TTO. A spike by Soonias gave Canada set point and they took it 25-11 on a reception error by Yu Koshikawa. Perrin and Soonias had six points apiece in the set.

Japan moved out to an 8-4 lead at the first TTO in the third set via good teamwork and capitalizing on some errors by their opponents. Trailing 9-4, Canada took a timeout to try and regroup. Japan was up 16-12 at the second TTO after Canada sailed a serve long. A spike by Ishijima gave Japan a 20-16 margin. Canada drew within 21-19 and Japan took a timeout. A block by Koshikawa moved Japan within two points of the set at 23-19. Justin Duff soared for a spike and Canada edged closer at 23-22. Fukuzawa‘s spike made it 24-22 and Japan claimed the set 25-23 on another spike by the star.

The fourth set was tight from the outset with Canada taking an 8-7 lead into the first TTO. A Fukuzawa spike moved Japan in front 11-10. Canada pulled ahead and were on top 16-14 at the second TTO. Japan tied it at 16-16 but gave back the lead on a service error by Koshikawa. A nice block by Perrin put Canada within sight of the match at 22-19 and Japan called a timeout. Canada closed it out 25-20 on a return error by Japan.

Live from Sofia: Rouzier for WoV –...