Portugal only needed two points today to secure third place in Pool C and a spot in the 2014 FIVB Volleyball World League, but Korea blocked those hopes, winning delaying all the decisions until tomorrow’s match. Jeon Kwang-In and Joao Jose were the top scorers. 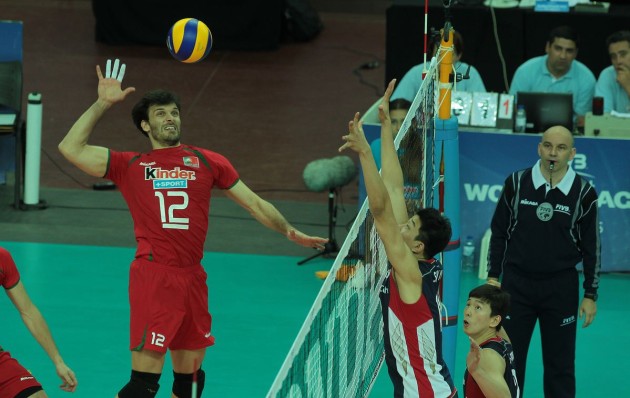 Korea took the lead with the first point of the first set, and continued with a long rally, that Korea won. The moment confirmed Portugal’s suspicions about the difficulties they would experience by playing with a spirited team, with the players motivating each other, combined with fast attack plays. The constant balance in the scoreboard would be broken with an ace from Han Sun-Soo, but the difficulties increased when Ki-Won Park team took the lead (15-10), reaching the second TTO with 4-pts advantage. A block from Jeon Kwand-In (18-12) motivated Flavio Gulinelli’s second timeout request, but it didn’t changed the course of the match. Jeon Kwand-In scored his fifth point in the set (22-15), making way for Korea’s victory 25-18.

Portugal learned its lesson in the second set. The team turned the score from 2-4, reaching the first TTO in advantage (8-6) with an error from Korea. With patience, the home team opened more and more breaches in the defense and with the confidence of the Koreans, arriving with a 3-pts advantage at the second TTO, obtained with an attack from Valdir Sequeira. A block from Joao Jose increased the lead (19-14). Korea reacted strongly, shortening the difference (19-21), but Alexandre Ferreira scored the 23-20 and the triumph in the set appeared naturally: 25-22.

In the fourth set, the initial balance was broken by Korea, with Kwak Seung-Suk serving and scoring 3 consecutive points (12-7) to enlarge the 2-point advantage in the attack and block from Shin Yung-Suk (16-10). Motivated by their fans, Portugal approached (17-19), but an ace increased even more confidence from Korea, who eventually won the set 25-21.

Korea’s Jeon Kwang-In was the best scorer of the match, with 29 points, while Joao Jose with 19 was the best among the Portuguese team.