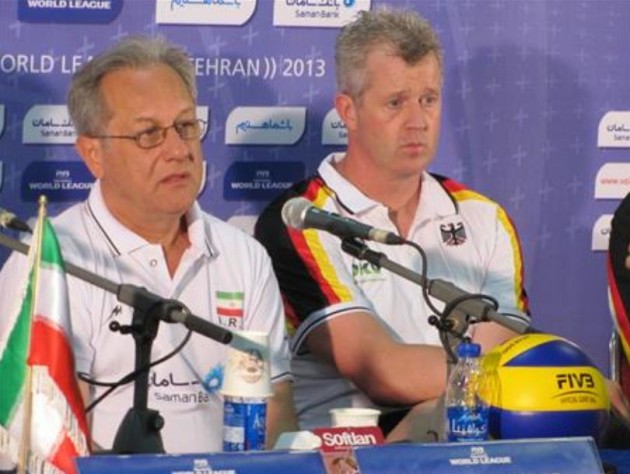 “We did not start the match with high concentration,” said Germany’s captain, Schöps Jochen. “Services of Iran team were perfect which put pressure on us. We had seen the match of Serbia against Iran, we were aware that tonight will have a tough match. Going to Argentina was not our main goal. As Iran team we were chasing learning lessons from each game.”

“First of all, congratulations to the Iran team,” said Germany’s coach Heynen Vital. “In my opinion they performed their best game. As my captain said, we were not in the game. It was as if only Iran’s team was in the playing court. Before the match I had estimated that the match would have 3-0 result. And perhaps we or Iran would get it. Our team is very young. We lost but we should perform a good game.”

“It was a fantastic happening for Iran,” said Iran’s captian Mir Saeid Marouf lakrani. “Germany is a good team; they had accumulated good points from their previous matches. We analyzed them well. We could stop their best players. Our reception and service were perfect. In these matches we played well with different combination. It proved that our team does not just rely on a special player.”

“I am glad that in fast month of Ramadan we won 3-0 against Germany,” said Iran’s head coach Julio Velasco. “We performed a good match. Our tactics improved we had a good balance during the game. Service was our key element for win.”

Germany’s loss brings a fresh breath to the Russians, who secure their second place spot in Pool B. Even with a potential comeback win on Saturday, Germany’s cannot surpass Russia’s points to take them out of their second place position, allowing Russia to move on to the FIVB World League Finals.

WL M: Placi – This was only a small step, the big one is to come tomorrow