In Brazil, in Cabo Frio there is the championship of South America underway. Chileans defeated Paraguay in four sets. 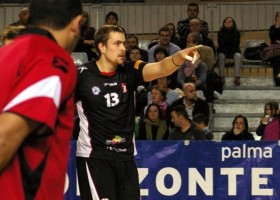 Chilean players enjoy the first victory in the tournament. Paraguayans were able to keep pace with rivals only in the first set and therefore they noted a second defeat.

In the first set of Chileans did not present a good level of play. Daniel Nejamkin’s squad was inaccurate in the reception, and as a result they made a lot of mistakes in the attack. In turn, the team of Paraguay had almost unmistakable Jose Gaona, who led the team to 25:22.

Changing the setter allowed the Chilean players of to catch a rhythm of the game, which resulted in taking over control of the second period. Good posture in the service hit by Sebastián Gevert and Dusan Bonacic made setting block and stopping Jose Gaona easier, so Chileans won the set (25:16) and tied the result.

In the next set the team of Chile was still dominant. They were very successful on the net, both in attack and block. At the second technical time Daniel Nejamkin’s proteges already led by 16:10, and finally won – 25:20.

The fourth set has confirmed good disposition of Chileans who quickly gained the lead (16:10) and never depart it until the end of the period. Finally, players from Chile won the fourth set (25:21) and the match (3-1), taking the first step towards desired medal.

Best scorers in the winning team were Gevert with 19 and Bonacic with 11 points, while in Paraguay, Gaona scored 18 and Ortiz 12.

For more news from this competition, click on South American Championship 2013 M.