Serbia continued the winning rhythm with fourth consecutive victory against Rwanda in straight sets (25-13, 25-20, 25-20) in the last Pool C clash of FIVB Men's U21 World Championship at Ataturk Hall in Izmir, Turkey on Monday. 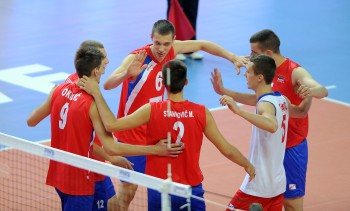 Now with Pool C matches concluded, Serbia led the table with a win- loss ratio of 4-0 (12 points), while USA, Tunisia and Canada were tied in points (6 each), number of victories (2 each) and the set quotient (7-7), where point quotient decided USA second of the pool, Canada third and Tunisia fourth. The direct face off between Canada and Tunisia (Canada won 3-1) settled the situation between the two teams as they were tied also in point quotient. Rwanda finished 5th with 0-4 record.

Now Rwanda joins the round robin tournament with the fifth ranked teams in their corresponding pools for classification 17 to 20th, while Serbia meet the 4th of Pool D in the round of 16

The Serbian coach Sinisa Reljic distributed the match effort to his entire list except star outside hitter Uros Kovacevic who had a rest; however the Serbian team had a wide lead in the first set 25-13.