Noliko MAASEIK and Euphony ASSE-LENNIK, i.e. the two teams that represented Belgium in this year’s CEV Volleyball Champions League, were in action this afternoon in the splendid Lotto Arena with 5’500 spectators in attendance and the trophy of the national cup at stake. Noliko eventually celebrated a 3:0 win to claim the title for the fourteenth time in its history out of 22 appearances in the final. 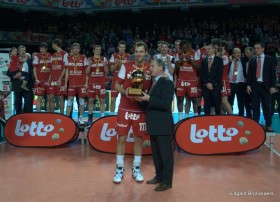 With a fantastic atmosphere contributed by the fans, Noliko went up 16:13 in the opening set but Euphony stormed back to draw level at 20. The final score (25-22) was contributed by two aces of Jelte Maan and a couple of mistakes committed by Euphony. After trailing 3:6 in the opening of set 2, Kevin Klinkenberg paced Noliko MAASEIK with three superb services and a “pipe” to turn the tables around (8:7). Noliko, the reigning national champion, played some great Volleyball breaking away 19:12 and Euphony had no chances to go for a possible comeback (25-18). With some more great serving provided this time by Latvian Hermans Egleskalns, Noliko opened set 3 with a 4:1 and basically controlled the game keeping a margin of 3 points for most of the time. Time-outs and substitutions asked by Euphony head coach Marko Klok did not change much and Noliko could eventually celebrate its win in straight sets (25-19) and hence a fourteenth title in the national cup.

CEV CL: Premiere in Lodz as challenge system will be used in men’s final four