In tonight’s much-awaited duel between titleholder Serbia and World. No. 4 Italy, the reigning champions kept the upper hand. The team of head coach Zoran Terzic outclassed the Azzurre in straight sets 25-14, 28-26, 25-18. 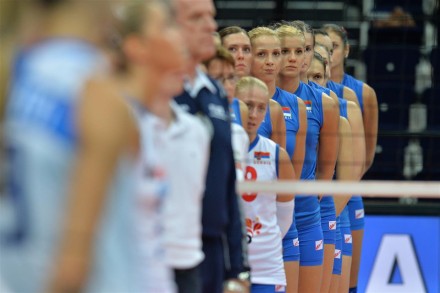 Serbia captain Maja Ognjenovic: “I think everybody was surprised that Italy played that inconstant tonight. The key of our victory were our serves. It was quite hard for the Italians to play as they hadn’t a good reception. We played well as team and did everything to win the game. It was good to have two days off and recover. If Italy had won the second set, the game could have turned completely different. I’m happy we made a great comeback at that moment.”

Italy opposite Valentina Diouf: “We didn’t start well because we were afraid of Serbia. We only played better after having noticed that we had a small chance to win. Nevertheless, we missed our chance in the second set. It’s a pity.”

Serbia head coach Zoran Terzic: “We put a lot of pressure on the Italian players. First on serve, then also in block-defense. They needed many chances to score. If we are physically and mentally ready, we can also beat Russia.”

Italy head coach Marco Mencarelli: “I wouldn’t say we played bad tonight. Serbia made an excellent job. We knew that Serbia is a strong team. Their blocking game is one of the best in the world. We did not find a way to overcome it. Our players maybe felt some fear because they are still young; meanwhile the Serbians have been playing together for a long time.”

See the profiles of Serbia and Italy.