On Saturday shortly before the start of the gold medal match starring Russia and Germany, CEV President André Meyer attended a press conference at Max-Schmeling-Halle to draw the line at the end of a memorable Women’s EuroVolley 2013. “Germany and Switzerland did a great job and they have delivered a classy event” he said while addressing the media. 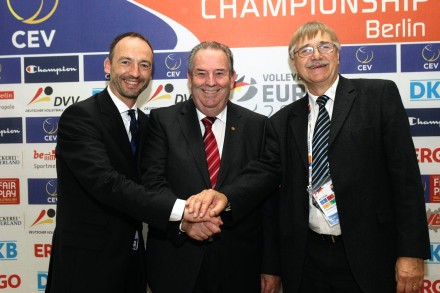 The organizers had just released some figures reporting that a total of 133,000 fans had attended matches of the EuroVolley 2013 since the start of the prelims in Halle, Zurich, Dresden, and Schwerin, thereby contributing to an average standing at 3,694 spectators per game. “I have been impressed by the supporters and the ambiance they created” Meyer continued. “I was amazed to see that even when Germany or Switzerland were not playing, still thousands of fans got together to attend matches of the Championship. As for the figures, as far as I can remember, they have exceeded our all-time records” added the CEV President.

There was much to be happy with also for the President of Swiss Volley, Christoph Stern. “The day our team played Belgium, 6,600 people were in attendance at Hallenstadion in Zurich. This way we were able to set an all-time record for Volleyball in our country” he said. “I have to thank our friends and partners from Germany for all alone we would have never succeeded in achieving this”.

“As we draw the line, we can only say that Volleyball won” added the President of the German Volleyball Federation (DVV), Thomas Krohne. “Apart from the fans who were just amazing, we have seen a huge interest also from the media. Many have followed the fairy tale of our team as they embarked on their mission for home gold. I also have to thank Swiss Volley for the very good cooperation” he concluded.