ECH M: Herning to see 4 equally ambitious teams battle for spot in next round

The gold medallists from the past edition, Serbia, will open the program of prelim Pool C in Herning on Friday afternoon as the guys mentored by Igor Kolakovic play Slovenia. The Netherlands and Finland will cross their ways for the second match of the opening day in a group where all teams and their respective head coaches sound ambitious and hopeful to make it to the Playoffs if not directly to the 1/4 finals coming up next week in Aarhus. 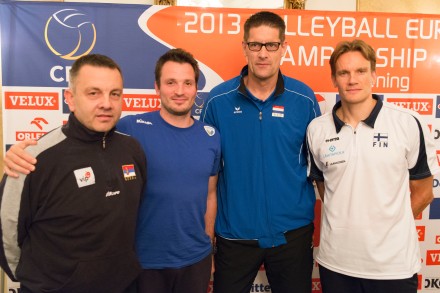 “The first game is always very important. My team is ready and I expect we will play good Volleyball. We’ve played good friendly games lately and we want to start with a victory and get the good energy for the whole tournament” Finland coach and former international star Tuomas Sammelvuo said. “Having played with my players the last few years I know them all personally and it’s completely different being on this side. I try to motivate the team and get the best from each individual player for the benefit of the team. We expect to play well, because we get good results when we play the Volleyball we know we can play. We are happy that up to 400 Finnish spectators will support us. It’s great to have a big crowd of Finnish people here and we want to go through to the quarterfinals and then it’s one game from then on; that is our goal

“We’ve been happy and lucky to complete a good preparation period of two months without any major injuries which have been a major concern for our team the last few years. We are happy to be here with a full squad and we have extremely high hopes and think only of the best and we will be very disappointed if we leave Denmark too early” added Slovenia head coach Luka Slabe. “I think it is a really strong group here in Herning. All the teams besides us have had some great success in international Volleyball. Serbia is the defending champions, the Dutch are former Olympic champions and are getting better all the time and both them and Finland were successful in the World League, so it’s an extremely challenging group and I don’t think any of these teams will get their final answer before Sunday. It will be close match ups every night and it will be really exciting for Volleyball fans to follow. For our team we always speak of highest expectations only. We have a very young and talented group. It will be a huge disappointment for us if we don’t go to the quarterfinals and it’s the only way we will think”

“Our group is very tough and the opponents have good national teams. It will be a difficult task to reach our goal – we want to play in the semi-finals, but it will be very difficult” stressed Serbia mentor Igor Kolakovic. “We have had a very good preparation with a lot of friendly games event though it is not the same situation as competition games. We will see what happens after the first ball. Our main goal is the quarterfinals which is a very important game because after that it is the medals. Every ball and every set is important to us”.

“We have prepared very well. This year we played World League after three years of absence. We played very well in our group and then we started our preparations with the same players and we had some tough matches against Germany and France. We also played a tournament in Poland which was very successful. We played well against Poland but lost 3-1, and the second day we won 3-0 over Russia in a great match that gave us a lot of self-confidence. We have done everything we could and look forward to meeting all these big teams” said Edwin Benne mentor of Netherlands. “The first goal for us is not to be fourth in the group so we go play by play and game by game. In this group I don’t expect a team that really stands above the other ones. That is actually really nice because you have to play really well and be good in every game to qualify. There are no easy matches in this Championship, you have to be ready for that. Our goal is to be among the top eight and then see what happens. Playing a Championship like this against big teams is not easy and we have to prove that we are ready. We have changed a lot in our team the last two years and we have a lot of young guys and for many it is their first Championship ever. I’m really positive about it but we are not that experienced so we have to see how it goes”.

To read similar news from this competition click on European Championship 2013 M.

GP: This was an important win for...