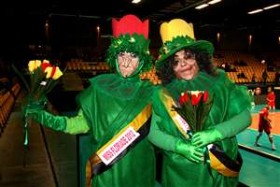 Saturday was fully devoted to the so-called “Auw Wieve”, as many of the local people dress up like an “old lady”.

The club of Noliko MAASEIK joined the party by admitting to the sports hall three of such “old ladies” for free and by superbly decorating the “Lotto Dôme” to create a unique carnival atmosphere for the Playoff match with Euphony ASSE-LENNIK.

Noliko had opened the Playoffs of the national league by scoring a 3:0 win against the archrivals of Knack ROESELARE and only seven days ago had edged Euphony in the finals of the national cup in Antwerp thereby booking a ticket for the 2013 CEV Volleyball Champions League.

The home guys dominated the scene in the opening set (25-13) before Dutch head coach Marko Klok got his side back on track and Euphony could go for the provisional 1:1 (23-25).

Noliko re-claimed full control of the operations in set 3 (25-17) before the highly-contested fourth set ended up in a 24-26 whereby the guests called for the tie-break.

There Noliko caught a good start and did not look back eventually sealing it at 15-10 to maintain its leadership in the standings.