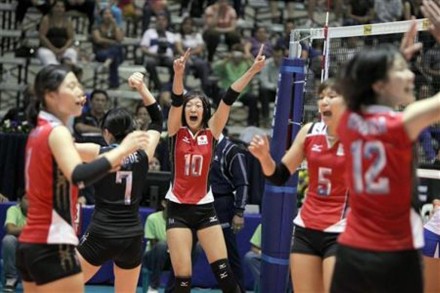 Japan improved its win-loss record to 2-0 (5 points) and Italy dropped to 0-2 (2 points). The Italians had lost to Turkey in five sets on Saturday also after leading 2-0.

Sarina Koga led three Japanese players with double figures in the score charts with 21 points. She was followed by Asuka Nomura and Saori Takahashi who each registered 18 points.

Italy’s Valentina Diouf recorded a tournament-high 31 points in the losing cause, while Laura Partenio and Raphaela Folie finished with 19 and 18 points, respectively.

Italy held the advantage in blocks (20-15) and in serves (6-5). Japan totaled 16 unforced errors compared to 19 by Italy. Foglie and Diouf had 7 and 5 blocks for Italy, while Takahashi and Haruyo Shimamura recorded 5 and 4.

Kanami Tashiro, captain of Japan: The Italian players are very tall and powerful so we had to rely on our defence to neutralize their power. That’s why we forced the match to a fifth set.

Shigekazu Okubo, coach of Japan: We couldn’t do anything in the first two sets against an Italian team with good technique and tactics. After the second set I told my players to play like them, hitting hard and also using their heads. The match was almost for Italy, so it was a great experience for my young team.

Luca Cristofani, coach of Italy: We are having moments when the concentration just shut down. I don’t think the competition is over and I hope we can come back tomorrow and play our game. About my bench, I have very good players but they are not as versatile as we need.