England and Norway to fight for ticket to second round

England and Azerbaijan played on Saturday the second game for the first-round qualifier to the 2014 CEV U20 Volleyball European Championship – Men at the Volleyball Centre in Kettering. England got the upper hand in straight sets (25-18, 25-9, and 25-17) and on Sunday will play Norway for the sole ticket at stake to make the second round which is coming up in late April. 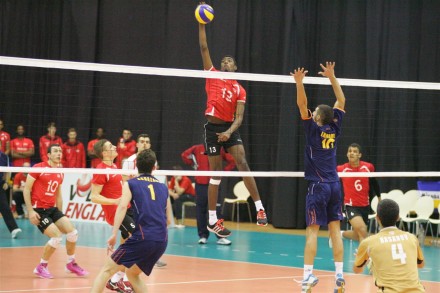 With Azerbaijan having lost the first match, they were very keen to get off to a good start. Both teams started with strong attacks but soon England took a 6:3 lead, followed by a score of 8:4 at the first technical time-out. Good spiking from England’s Robert Poole (from both the opposite and outside position) brought England to win the first set 25-18.
In the second set England continued to have strong closed blocks and some great middle attacks from Teme Samuel (pictured). This was followed by a monster block from him and Thomas Ketley, which brought England to a score of 16:4. All nerves were gone and good court coverage and defence from England allowed them to win the second set 25-9.
England had a strong start in the third set, with a 4:0 lead; but they could not really relax when Azerbaijan came back to 4:8 at the first technical time-out. With good substitutions from head coach Darren Lewis, England took the third set in hand again and led 16:7 at the second technical time-out. Azerbaijan fought back for their last chance to stay in the Championships, but in the end England gained a 25-17 victory in the third set winning them the match 3-0.

England is now top of the table and faces Norway on Sunday for the last match of the tournament. England team captain Toby French said: “It has certainly been one of the highlights of my Volleyball career to play in front of a home crowd chanting ‘England’!”

Head coach Darren Lewis felt that his team had an “impressive first performance of the competition” and is “hoping to cause upset tomorrow in our match against Norway.”