Lases Cup comes to another successful end in Latvia

The Lases Cup – a competition for elementary and secondary schools established by the Volleyball Federation of Latvia 13 years ago – has come to a successful end. 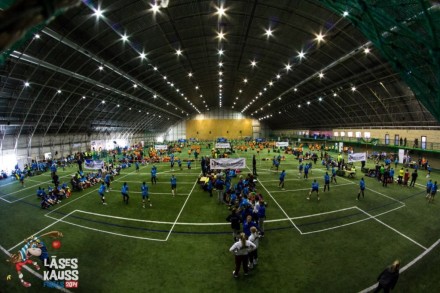 The Lases Cup was organised in two rounds. The first round, the qualification round, was held from September 2013 to March 2014 and took place in regions and cities around Latvia. The second and final round took place in the capital city Riga.

Participants were between the ages of 13 to 20 and this season’s Lases Cup was attended by 264 schools comprising 714 teams and 5,984 participants. The Finals saw 88 schools, 118 teams and 1,300 participants taking part. As has been the custom over the past few years, teams from neighbouring countries were also invited to participate.

While the activities of the Lases Cup always receive a great deal of attention from the local media, this year saw a high number of TV broadcasts, videos on the internet and news on various internet portals and youth magazines. Social networks were also abuzz with around 1,200 photos from Lases Cup uploaded and shared on social networks, reaching an audience of 17,000 youth.

The President of Latvia, Andris Berzins took part in the opening ceremony of the Finals for a second year in a row.

The opening ceremony also saw the participation 2014 Sochi Winter Games Olympians Oskars Melbardis (Silver medalist and pilot of Latvia’s four-man bobsleigh team) and Andris Sics (bronze medalist in luge). These Olympians encouraged the young players attending the final stage of the Lases Cup to work and train hard so that one day they may also fulfill their Olympic dream.