Each week in the run up to the title showdowns for the men in Poland (August 30 to September 21) and for the women in Italy (September 23 to October 12), FIVB will introduce an international volleyball star. This week we talk about the rise of Iranian volleyball and its driving force, Mir Saied Marouflakrani. 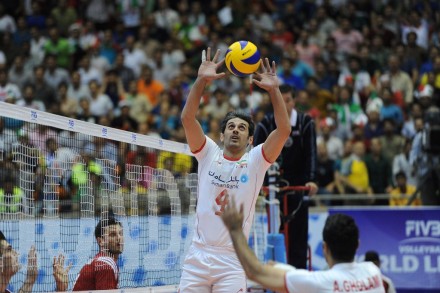 Mir Saied Marouflakrani is entering new territory once again with his Iranian national team. Their mission is to surprise the world. A few days ago, they achieved this in spectacular fashion once again at the finals of the FIVB World League in Florence.

The fact that Iran made it into the top six national teams of the world for the first time ever caused a stir. But things got even better at the finals. After a narrow 2-3 defeat at the hands of Olympic winners Russia, they defeated world champions Brazil 3-1. Russia were not able to progress to the semifinals – and Iran ended up in a brilliant fourth place. FIVB President Dr. Ary S. Graça F° praised the Iranian volleyball players explicitly.

When the Dream Team was chosen at the end of the World League, the list of players included international stars like MVP Taylor Sander (USA), Wallace de Souza and Lucas Saatkamp (both Brazil). It also included Mir Saied Marouflakrani. He was chosen as the best setter of the FIVB World League, ahead of big names like Bruno Rezende (Brazil) and Dragan Travica (Italy). It is no coincidence either, as the 28-year-old is the driving force behind Iran’s rise to the top of international volleyball. As a setter he has incredible skills, which is demonstrated by his numerous individual awards.

In 2008 and 2012, Mir Saied Marouflakrani received the best setter awards at the Asian Olympic Qualification tournaments. At the Asian Championships last year, he was also awarded MVP. Iran won gold, ahead of volleyballing greats such as Korea and Japan. The continental championship victory, along with the two gold medals at the Asian Cup, is one of the biggest successes in Mir Saied Marouflakrani‘s career, which got off to a spectacular start in 2003 with the bronze medal at the World Youth Championships. The successes in the junior team were the basis for the spectacular development that has taken place in Iranian volleyball in recent years.

“Iran will continue to surprise everyone. They have a good team and a very good setter,” said Bernardo Rezende, successful coach of Brazil’s national volleyball team, full of respect. Top international trainers have also contributed to the rise of one of the best nations in the world in recent years.

Coach Julio Velasco, who was twice world champion with Italy, joined the Iranian team in 2011, helping them to their first participation in the FIVB World League last year. After Velasco’s return to his home country of Argentina, Serbia’s Slobodan Kovač has taken over as Iran’s new coach this season.
Under Kovač’s leadership, the team has taken another step forward. Iran’s successes have triggered a real boom in volleyball in the Islamic Republic. Kovac even suggests volleyball may become the number one sport in the country, overtaking football. “It’s now difficult to get coffee in a shopping centre because so many people approach you and want to take photos, or just say hello,” said the coach in an interview. At the FIVB World League matches in Teheran, the 10,000 capacity arena was sold-out and filled with singing fans hours before the matches got underway. When the team returned from the World League Finals in Florence, thousands of fans were waiting at the airport to give Mir Saied Marouflakrani and his teammates a spectacular reception.
Now Iran’s focus is on the FIVB Volleyball Men’s World Championship.

“We will try to get fully prepared for the World Championships from now on. My team is so strong and my players are very determined,” said coach Kovač. As a playmaker and captain, his setter Mir Saied Marouflakrani is an “absolutely key player”. Just like his teammates, he is dreaming of a medal at the World Championship. This would see the man from Urmia enter new territory once again – just like a move to a top European club would. Marouflakrani, arguably the best setter in the world at this time, is considering offers from Italy and Ankara.

We are so proud to have Saeid in our team. He will stay in Iran and play for Shahrdari Urumia.

When Moroz hits rival in the head…...