Calais is a traditional departure point for French visitors crossing by boat to Britain, and France’s volleyball players have been in the northern port city to begin the journey that they hope will lead all the way to London and the Olympic Games. 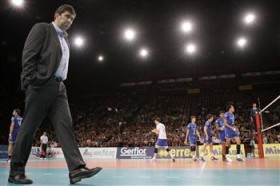 Philippe Blain’s team played friendly games against South Korea on Sunday and Monday at Calais’ Calypso Hall to warm up for this coming weekend’s opening FIVB World League matches in Florence, where they will take on Pool C rivals USA, Italy and South Korea. Yet their attention is already fixed further ahead, on the Olympic Qualifying Tournament in Bulgaria in early June.

France will face Pakistan, Egypt and Bulgaria at the event on June 8-10, and although they won both games against the South Koreans in Calais by the same 3-1 scoreline, coach Blain warned them they would have to step up a gear for the challenge facing them in Sofia. Indeed, he changed all six players after they lost the second set of Monday’s second encounter, stressing that his team could not afford to “switch off”. He said: “This is a warning for them and I reminded them why we are here.”

Blain was pointing to their mission to make amends for their failure at the November Olympic pre-qualification event on home ground in Tourcoing, where France were surprise semifinal losers against Belgium in a gripping five-set contest. He said it would be wrong to focus purely on Bulgaria – “Egypt play quite well” – but admitted the hosts posed the biggest threat to their Olympic ambitions. “We know the difficulty of playing them there”, he acknowledged. “We’re going to have to be able to defeat a top 10 team in the world.”

The France squad have been together since May 1 and captain Pierre Pujol explained they had held two meetings to reflect on what went wrong against Belgium six months ago. “We really want to get playing together again after what happened in November. We played a great match against Germany but were badly prepared to face Belgium”, said Pujol. He added: “I can feel everyone’s concerned. They’re all keen to get out and play. We have to avoid having regrets for the next four or eight years or even our whole careers.”

He was talking, of course, about the spectre of missing out on the Games. Yet Blain is confident that will not come to pass. “I am always optimistic – we’re going there to win our ticket.”