Nicaragua’s captain Claudia Noguera said “the difference was the courage of our team. Guatemala have been a fighting team and it was not different because they kept pressing us the whole match. I think our defense helped quite a bit and despite her sickness our libero (Juny Aguilera) finished playing to secure our defense.” 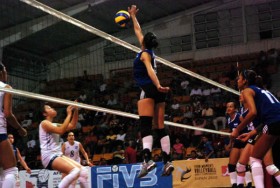 On the other hand, Diana Arias, the captain of Guatemala, expressed: “It is just our fifth match as a team and the experience from the tournament is very positive. With more time or work we will be stronger and now we have to think in the Senior Central American Cup to do a better job.”

Rene Quintana, coach of Nicaragua said he had a double satisfaction since “first, matches like this one is what we need in our region. I mean that when we face each other we had to sweat the shirts”.

“And second, it is the first time that a female team of Nicaragua gets a victory against Guatemala in Nicaragua” she added.

“The experience was a key at the end of the match, because we have a young team that has been working together for year,” Quintana said.

“I congratulate the Organizing Committee, the Federation and the participating teams since here the winner was the Central American volleyball,” the Nicaraguan coach added.