SER W: City of Subotica ready to break once again all records of attendance

Serbia – winner of the past three editions – will open its campaign in the 2012 CEV Volleyball European League – Women playing the first round of Pool A through this weekend at “Dudova Suma” sports hall in Subotica. Team captain Milena Rasic, head coach Zoran Terzic and Mr. Nemanja Simovic, the local Councilor for Youth and Sports there in Subotica, all attended a press conference this afternoon at “Glorija Lux” hotel to share their feelings and expectations before the start of the European League. 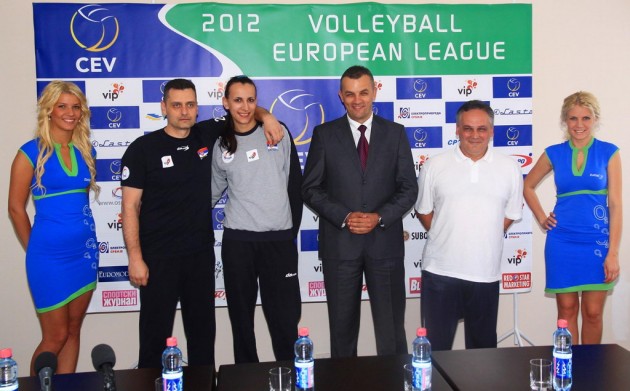 Last year the city of Subotica hosted Serbia’s home matches with France and eventually broke all records in terms of spectators’ attendance for the 2011 edition of the European League, with a total of 4’000 people in attendance throughout the weekend and a sold-out hall for every match that was scheduled there.
“I am extremely pleased to be back here in Subotica. We really feel like at home here but because of the very tight schedule we have been confronted with, we have many players that are injured or exhausted at the moment. We hence have to rest some players and Maja Ognjenovic, Jovana Brakocevic as well as Natasa Krsmanovic will for sure not play this weekend” said head coach Zoran Terzic. “However, I am not too concerned because our second lines all have the necessary quality to make our fans happy with our performance here in Subotica” he added.
While playing Hungary, Romania and Spain, Serbia – that recently qualified for the Olympics – will try to re-assert its ambition to go for a fourth consecutive crown in this competition.

As the Volleyball Federation of Serbia and their general sponsor “Vip mobile” have embarked on a long-term project of social responsibility, the European League matches will be preceded – on Saturday – by a game starring the women’s senior national team and the local sitting Volleyball club from the city of Subotica. “This club was founded last year and we started competing in the national championship. It is still early to go for some notable achievements, but we are on the right track and currently we occupy the 5th position in the league tables. The reason I founded this club is the lack of physical activities for the persons who are impaired and my wish to attract them to play sitting Volleyball. Of course, sitting Volleyball can be practiced also by healthy people, and I would like to invite all of you who played Volleyball once or wish to play to join us and practice with us” said club President Gordan Glončak.