Man whose name in Duren can not be forgotten will become the new coach of Eviva Duren. He will replace Söhnke Hinz who was sacked in April. 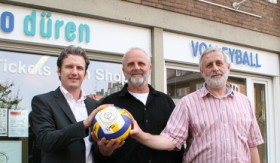 Michael Mucke went from Duren 13 years ago, he was the coach from 1996 to 1999.Since he left the club, the club has grown and strengthened, now playing in the biggest hall in the state.
The club wanted to grow and compete for his best between 2005 and 2007. This was achieved more or less well. The debt that resulted from participation in the Champions League in recent years, could never be eliminated completely. The past season was completely failed. Duren was only seventh, won only two games at home and rarely worked as a team.

Therefore, the club dismissed manager and assistant coach.The first task of the new coach is helping to build the new squad. Evivo have Five players under contract. “We need a man for every position” Evivo looking for a mix of players with experience and talent. “The goal is to build a powerful team that fits the budget,” said the future coach. And the athletic director Goswin Caro added, “team which will once again inspire the audience.”

SER W: City of Subotica ready to break once again all records of attendance