EL W: Swiss rookies take on home round with the ambition to win more sets

After suffering six defeats in the previous rounds while playing in Varna and Izmir, the Swiss ladies can’t wait for their home leg in the prelims of the 2012 CEV Volleyball European League. Via the support of the local crowd and their well-known fighting spirit, the players mentored by Svetlana Ilic will be trying to take home some more sets as they challenge France, Bulgaria and Turkey for the third time. 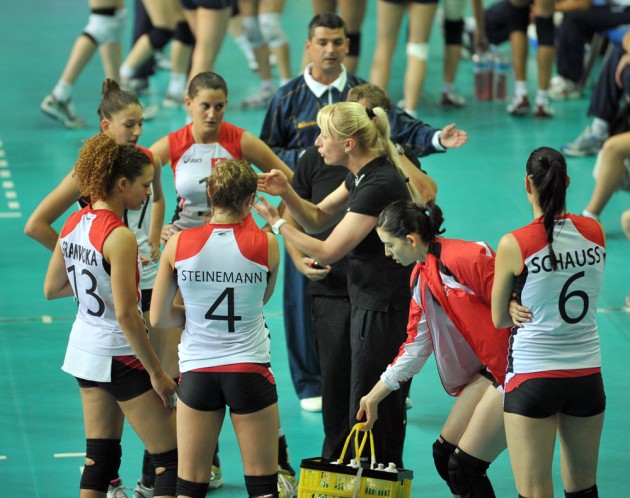 Switzerland has been able to claim only one set out of the six games played so far but this year’s rookies in the European League were close to achieve this feat while playing group leader Bulgaria this past weekend in Izmir. They eventually failed to achieve this result as they lost momentum in the deciding phases. As for Turkey – which is playing this year with a young, but very motivated group as the top players are busy with the FIVB World Grand Prix – Switzerland was so far not really able to provide the “Sultans” with a real resistance. “Even though we could have our chance while playing so young opponents, we did not find a way through their block” says Switzerland’s head coach, Serbian-born Svetlana Ilic.

France was recently strengthened with the addition of middle blocker Christina Bauer who joined the group last weekend in Izmir after completing a memorable season in Italy’s first division. The 196 cm tall player of Norwegian descent contributed some fast attacks right from the middle to accelerate the pace of her side and down Switzerland there at “Atatürk” sports hall.
As for Bulgaria, the group around Italian-born Marcello Abbondanza did not show any weak point impressing with a very fast play and solid block-defense system in the previous rounds.

“We all would love to move quickly up and closer to Europe’s elite but these teams are still out of reach for us” explains Svetlana Ilic. “My players have showed great fighting spirit and the desire to improve but they still lack the necessary skills. Additionally, we shall figure out what we can really do – starting from our physical features – to put our opponents under pressure when it comes to the next matches”. The Swiss ladies have first to fix their own way of playing before they can focus on tactical issues and for that reason Ilic is trying to adjust the reception and defense of her side. “In Fribourg Nadine Jenny will be playing again as libero, so we shall stabilize and get more consistency for our defense line” stresses the Serbian-born lady who is also coaching the Swiss national champions of Volero ZÜRICH.

As for the opponents, their goals in this year’s European League are quite heterogeneous.
With the top players starring in the FIVB World Grand Prix, the young Turks are trying to draw the attention of their head coach to be possibly added to the roster that will compete at the London Olympics or to sign profitable contracts with top clubs since a rule introduced there foresees and implies that four Turkish players have to be included in the starting six for all matches of the national league.

As for Bulgaria, the “Lionesses” desperately want to make it to the final four to pocket their ticket for next year’s World Grand Prix while preparing for a second round qualifier whereby they shall make it to the final round of the 2013 European Championship to be co-hosted by Switzerland and Germany.

France is also trying to get ready for a very demanding qualification round where two tough teams, Slovenia and Belgium, are waiting for the ladies mentored by Fabrice Vial, who is currently resting some of his best players.