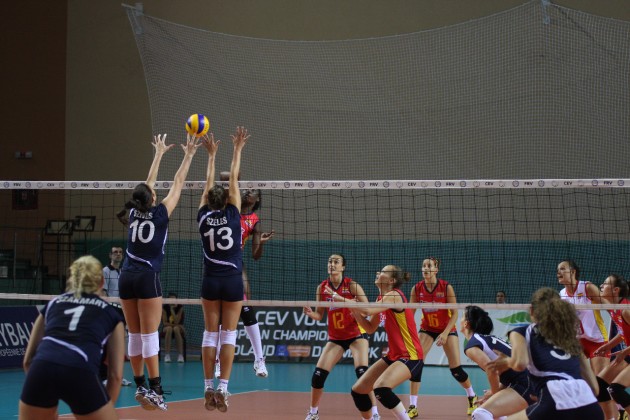 Hungary started out pretty well with setter Julia Milovits looking inspired and capable of exploiting the offensive skills of opposite Rita Liliom. Hungary’s storm (8:0) caught Spain by surprise and even though the Spaniards woke up and responded via their “ace” Milagros Collar, still they trailed 12:16 by the second technical time-out. Hungary kept momentum with libero Rita Molcsanyi that helped her side preparing the right pre-conditions for the side-out (21:18). However, the last word was yet to be said as Spain clawed back vigorously with Collar and outside hitter Maria Segura, thereby calling for a thrilling final rush that eventually resulted into the final 29-27 for the Iberians.

Hungary fought back in the second set going up 8:5 and 16:10 with the passes by setter Milovits being excellently finalized by Liliom and Maria Szivos. Once again Collar and Segura tried to steer the Spanish comeback but this time it was too late and Hungary could go for the provisional 1:1 (21-25). Collar destroyed Hungary’s defense line in set 3 where Spain showed no mercy for its opponents cruising away 8:3 and 16:7, thereby paving the way for a massive 25-9 that reflected the absolute supremacy displayed by the Spaniards in that section of the game.

With Spain moving up 8:5 in set 4, Rita Liliom took her side by the hand to get the lead by one point at the second technical time-out; Hungary continued to pressure their opponents (21:18) but some minor errors and the great contribution of Collar flipped the tables around and Spain could finish it off with a 27-25 that sealed the final 3:1.

EL W: Serbia makes it 12 in a row to finish prelims with impeccable record

What a move by Maribor’s libero! Clears...