WL M: France gets job done with sweep of Korea 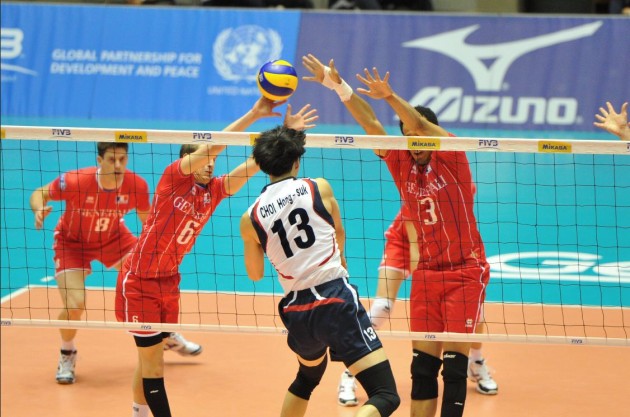 France completed pool play with a 9-3 record and 24 points and awaited the result of the second match between the United States and Italy to find out if it would go to the Final Round in Bulgaria. France needed Italy to win the match either 3-0 or 3-1 to advance.

Korea held an 8-7 lead at the first technical timeout and extended it to 15-12. France came back with a Tillie attack, a Korea error, and a spike and block by Moreau to lead 16-15 at the second technical timeout. The teams traded points until France extended its lead by two at 18-16 and then to four at 22-18. Korea called timeout, but could not cool off France, which reached set point at 24-19 and won on a block by Trefle and Tillie. France held a 6-1 lead in blocks in the set.

France took a 6-2 lead in the second set and led 8-4 at the first technical timeout. With France leading 9-4, Korea called timeout and responded with two straight attacks from Jeon to pull to within three at 9-6. But France got the ball back on a tip by Trefle and scored four straight points to lead 13-6. Korea never recovered. France reached set point at 24-15 and won the set on a back-row attack by Samica. Moreau scored six points in the set for France, who also scored five points on Korea errors.

France led 7-2 in the third set when Korea scored three straight points and cut the lead to two. France called timeout and came back with a block by Samica to lead 8-5 at the first technical timeout. Korea never rallied.