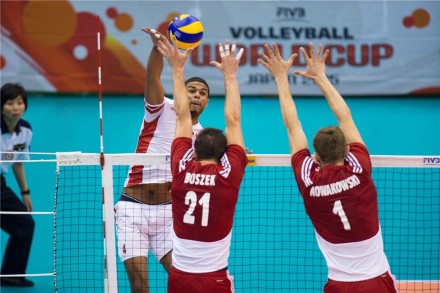 As it was expected, Kurek was the one that triggered Poland with a few powerful spikes (8-4). Nowakowski added a couple of blocks and Polish team already made an unreachable gap for Tunisia at the very start.

Agrebi got angry and grounded Polish attackers to reduce the opponents’ lead, but it was only a twitch by the African side. Kurek fired aces and kills (19-12) and Poland rushed into 1-0 lead in sets (25-17).

Kurek continued with a high tempo play and along with Polish secret weapon Mika, gave his team an early 11-6 lead that determined the rest of Set 2.

Bieniek torpedoed Tunisian receivers from a service line, while Kurek added another superb spike for the largest advantage of Poland until 19-11. Tunisian time-out didn’t change much as world champion was pulling all the strings of the game (25-15).

Since there is not a single team that strayed to the World Cup, Poland had to expect at least one tough set against Tunisia. And it was the third. Polish team started to play a bit to relaxed, especially on the serve.

Two conxecutive errors by Kubiak and Africans had 9-7 lead! Unfortunately for Tunisia, Kaabi responded on the same way and Poland leveled 10-10.

POL W: American opposite suspends her career due to mother’s illness