WC M: WHAT A SWEEP! USA beat Russia with all their weapons!

United States eliminated Russia from possible promotion to Rio 2016 and increased their chances 3-0 (25-23, 26-24, 25-17)! Americans were strict teachers today at the 2015 FIVB World Cup, showing Russians what level of play is necessary in order to qualify for the Olympic Games. Now, the last round will determine spots for that tournament and three teams could claim them – USA, Poland and Italy. Poland and Italy will play against each other. 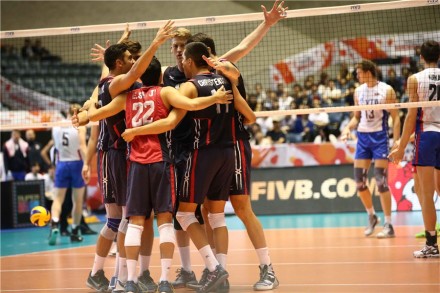 US team was furious until the first TTO in Set 1, getting huge advantage 8-3. Muserskiy was unfocused, sending spikes and serves outside, while on the other side, Anderson was Christenson’s option No.1 in offense. Rally by rally and Russia was approaching with Kurkaev taking over in „Zbornaya“. Firstly, at 10-8, but USA separated again 19-15. Secondly, at 21-19 and 22-21. Both teams struggled with serves in the finish, but Lee scored through the middle for 25-23.

Russians were much more determined in the second set, being one point up front at the first TTO 8-7. The veteran Tetyukhin was on the run. This advantage has risen to 13-10, but Americans leveled with 5-2 run (15-15). It marked the battle for every ball and no team had more than a single point gap. On one side Sander and on the other Tetyukhin and Mikhailov kept the hopes of their fans alive. USA turned second third set ball into 2-0 (26-24).

Since they survived several comebacks from the Russians in previous two sets, American players wanted to avoid it in the third 4-1. Russell gave his huge contribution to Sander’s and Anderson’s performance 8-3. Whenever it had a chance to convert a counter attack, US team didn’t miss it. Russia was playing kind of lifelessly 12-7. Alekno’s time-out at 14-7 was last attempt to save his players from catastrophic defeat. But, it was in vain. Russians kept showing poor play in this set 16-8, until final 25-17.

Aaron Russel scored 16 points in USA as the best scorer of his team. Maxim Mikhailov collected 19 in Russia.

Run, Kovač, run! Head coach of Iran wants to save ball with his libero (VIDEO)