FRA M: Arnaud Josserand is happy that he’s with the French National team

Named assistant coach of the France team, Arnaud Josserand is preparing, as the rest of the staff, to welcome the players summoned by Laurent Tillie to prepare for qualifying matches for the European Championship. 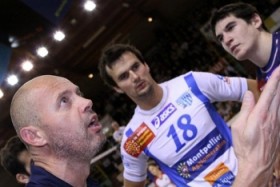 Recognizing the difficulty of the task after the failure in Sofia, the current manager of Montpellier Volley believes in the team:

“For me, being in the French team first as a player and now as a coach, it’s a real honor, the technician explains. With Laurent, we will strive to work in continuity with what has been done with Philippe Blain. There was no time to change many things. We will work on the same basis to try and rebuild something else.”

To the question whether he would one day be interested in the position of the coach, Josserand is clear: “With Lawrence, we are a duo that works well, which has proven in Cannes. We know each other. Lawrence is the boss, I’m the assistant. I do not want to become Caliph instead of the caliph. I’m here to help Lawrence, and make this duet with the same synergy of some years ago. If we win the qualifier for European Championship, I certainly hope that my adventure will continue with this team.“

FRA: Poitiers property will be auctioned?

SRB W: Zvezda one step away from...