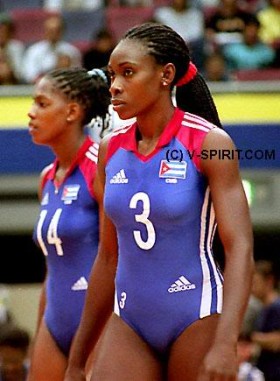 Last week, 3 time Olympic gold medalist, Mireya Luis, was in Ciudad Juarez, Mexico, to attend the opening ceremony of the XI Women’s Pan American Cup. In case you didn’t know, Mireya is still very active in the volleyball after she retired in 2000. She is currently a member of the NORCECA Confederation Board of Administration.

At the press conference, Mireya could not hide her disappointment on Cuba’s failure to qualify for the 2012 London Olympics.

“After 40 years of participation in the Olympic Games is very hard for us. The level of competition in other countries has increased and it is more difficult to qualify. We feel sorry about not being in London and I think Cuba will be missed. The Cuban Federation is currently working very hard to analyze the situation of volleyball in the country with a short and medium term project that can contribute to return the teams to the biggest stage. I am sure that effort and strategy will have big results and will help to be back in the Olympic Games of 2016, because Cuban volleyball deserves it.”

We can totally sense and feel the heartbreak of every Cuban player and fan in regards to missing the Olympic Games.

Mireya only didn’t share about Cuba’s current status but also she took time to reminisce her glorious days with the Cuban squad.

1992 Barcelona Olympics: “The games of Barcelona were special, because it was my first time at that stage. It was beautiful because I debuted between 1982 and 1983 with the national team, but I couldn’t play because Cuba didn’t take part in 1984 or 1988.”

2000 Sydney Olympics: “Many teams had a lot of chances to be champions at that time, we faced the Russians in the finals and we were down by two sets against them”, she recalled. “Everybody thought we would lose but we did not quit. In the end we won the next three sets and the effort was worth a lot. Sydney was my last chance to win another gold medal and 70 per cent of the team members also were in Barcelona, so it was my biggest thrill and the most treasured memory.”

OG M: Priddy family gets together to...