ECJ M: Coaches agree – everything is open in Pool II

The 2012 CEV Junior Volleyball European Championship begins today in Randers. And if you trust the opinion of the head coaches, everything is wide open in Pool II. 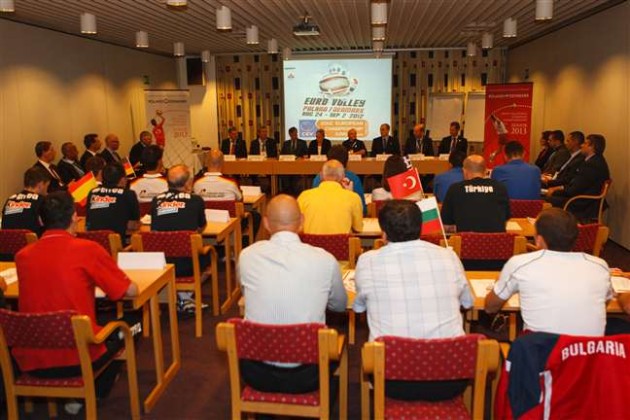 Six teams are set to compete in Pool II in Randers and all are potential candidates to proceed to the playoffs in Poland.

Danish head coach Fred Sturm: “As you can see the group has a lot of good teams. It seems like pretty wide open as far as which team will be at the top of the charts. At this stage we do not know enough about our opponents to say what to expect. There are so many teams in this age group that can play at a great level”, he says.

Denmark faces Bulgaria to open its campaign in its first appearance in a final round of the European Championship. And tough Bulgaria is clear favorite, Bulgarian head coach Miroslav Zhivkov does not predict a clear win. “I do not know the Danish team very well. But what I know is that they are in very good shape. The first match of a tournament is always difficult. We are having a tough game ahead of us, where I hope Volleyball wins. It is an even pool, where all teams have a chance to move to the next stage”, he says.

Germany qualified as the last team for the final round as the best number two in the third qualification round. “All teams are in the same situation. I believe that all teams have the same chances. This is the final round of the European Championship and all teams have proved they can play at the same good level. We will try to play our best Volleyball. We booked the last ticket to the final round so we take it match after match” says Germany’s head coach Ulf Quell.