The home heroines of Slovakia and Israel started well their European campaign in Poprad as they opened by edging Sweden in straight sets and Spain 3:2 respectively before the actions continue throughout the weekend. 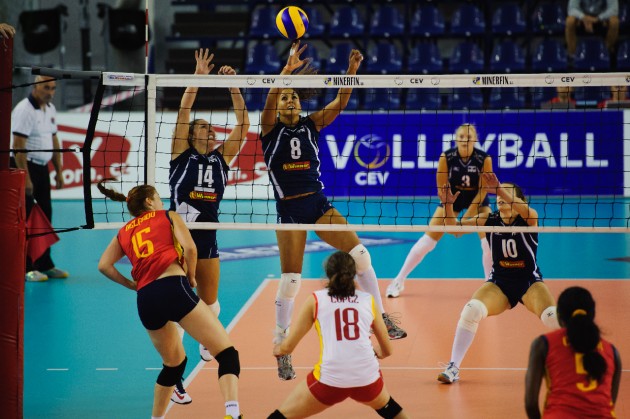 Israel actually contributed for the surprise of the day as the ladies mentored by Arie Selinger got past Spain with the score of 3:2 (19-25, 28-26, 18-25, 25-21, and 15-13). Spain stood out with their defense and blocks thereby claiming the opening set and went up 22:18 also in the second before Israel fought their way back to go for the provisional 1:1. Spain then cruised to a speedy 25-18 in set 3 but Israel did not surrender, dominated the scene in the fourth set and called for the tie-break, seizing the day at 15-13 and taking two points from the game. Anna Velikiy and Mirtha Correa top scored for Israel and Spain respectively with 21 points apiece.

“We did not play any match after the European League so it was difficult for us to start but once we got into the game, we showed a more stable play. Even though we did not play our best, we could beat Spain and this makes me happy because they are ranked much higher than us. For tomorrow I expect a tough game against Slovakia” said Selinger.

“It was a bad game for us; we were leading 1:0 and 22:18 in the second set but we lost control of the game. This is something I cannot explain and this defeat is very painful. After missing three rallies, everything turned up and down for us” commented Spain’s mentor Francisco Hervas.