Dominican Republic was crowned as champions of the first edition of the U-23 Women’s Volleyball Pan American Cup after outclassing Brazil in straight sets (25-18, 25-16 25-19) showing evident superiority over their South American opponent in the match at Miguel Grau Coliseum of El Callao on Saturday. 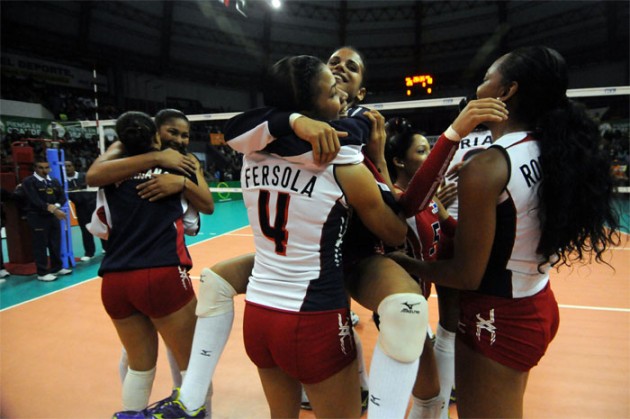 Lisvel Eve led the outstanding performance of the Dominican side with 17 points, including 5 blocks and 2 service winners. She was followed by Jeoselyna Rodriguez and Cándida Arias with 12 and 11 respectively and 5 blocks from Arias. Marianne Fersola and Yonkaira Peña chipped in with 8 points apiece.

Gabriela Braga and Sara Silva were the top scorers of Brazil with 15 and 14 points respectively.

The Dominicans held a 15-10 lead in points via blocks and 4-1 in aces. Also they made 10 unforced errors to 19 from the defeated side.

The service location and the close blocking at the corners were the key factors in the victory for the most effective team during the whole week and with more presence on the court.

The defense of libero Brenda Castillo and the accurate job by setter Niverka Marte were also major contributors to the success of Saturday and during the preliminary round and semifinal phase.

“This is the result of a work in progress for years”, Dominican Republic’s coach Marcos Kwiek said. “We grew up with the tournament improving day by day. At this age group is very difficult to keep the concentration for a whole match but they did it today. It was a 3-0 victory but a well fought one.”

“It was a team-effort and the most important thing was that we never were over confident knowing that on the other side of the net we had a big opponent”, Dominican captain Niverka Marte said.

“We achieved our objective of giving my team more volume in their game and more experience”, Brazil’s coach Luizomar Moura said. “Now we will work on getting more speed from our middle blockers and a more effective attack ahead of the South American Championship.”