Dutch Volleyball Federation (Nevobo) decided to introduce change of the volleyball rules for the season 2016/2017.

Counting all volleyball federation in Europe, Nevobo made the first step in making volleyball more dynamic and fun than it currently is by changing some and modifying some other rules. Those rules will be applied only to lower ranks of the competition in The Netherlands as well as in youth categories, but NOT in the Top division. It is because official national championships are obliged to conduct international rules established by the International Volleyball Federation (FIVB) and European Volleyball Confederation (CEV).

At the end of previous season, Nevobo asked fans to make suggestions, tips and specific proposals for the change of the rules. The most frequently mentioned suggestions were judged by Nevobo. Some were granted immidiately, while some others will be introduced later. Recall PART 1 of the new volleyball rules.

• Touching the center line is allowed.

Returning the ball from the free zone

• Once the ball passes net antenna, it is out of bounds even if it happens after the first touch. Returning the ball from the opponent’s free zone (beyond antenna) is not allowed.

Exception: In the Dutch top division this new rule does not apply. Therefore, the ball may still be recovered from the free zone. This is because there is sufficient free space in the top division games.

• Time-out (TO) lasts maximum 30 seconds. This means that when the team who requested it and the officials are ready to play within these 30 seconds, the game resumes.

• During the TO, entire court can be used: teams no longer need to stand outside the court. Substitutes may also warm up in the court although, using a ball during the TO (still) is not allowed. Of course, it needs to be ensured that there are no wet spots from water bottles left behind on the court.

• After the whistle for the end of the set, teams no longer have to walk outside the court to get to the other side. However, they must walk around the posts; it is not allowed to walk under the net.

• During the break between sets, substitutes may warm up on the court as long as they do not distrurb the moppers and/or entertainers.

• The break between sets lasts maximum three minutes. Immediately afterwards, both teams and officials must be ready to resume the game.

• Regardless of the number of substitutes on the bench, each team is always entitled to six substitutions per set.

• The court zone which is used for substituting a libero is expanded. Now, libero can be substituted throughout back line and sideline. The only condition is that referees and statisticians are able to see the substitution.

• If the team is declared incomplete due to injury/injuries, libero may become a court player (needs to put on a different jersey).

• This is not really a change in the game rules, but a clarification: An attacker may not spike the ball that is played overhand by the libero from the attacking zone if the ball is still completely above the net. The question in this situation is always the same: what counts as overhand ball by the libero? The following examples count as overhand ball. 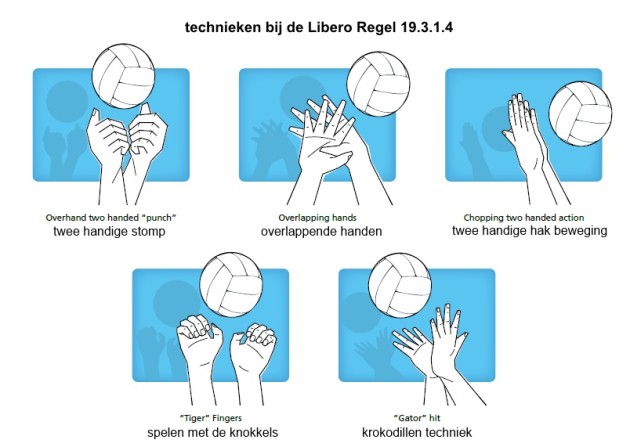