Stav Jacobi for WoV (PART 1): “Terzic told me – We can be like Atletico Madrid”

Volero Zurich president Stav Jacobi gave a large interview for WorldofVolley in which he talked about many interesting things. Read the first part of the interview on our website... 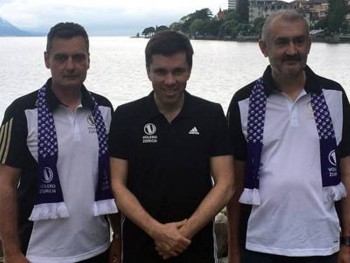 A new season is in front of us. Volero Zurich will definitely once again have the highest possible ambitions, including winning all the domestic trophies… But, what about the CEV Champions League, the competition that the Purple squad have never managed to win? We asked Mr. Jacobi how does he see his team in the 2016/17 CEV Champions League edition.

“Head coach Zoran Terzić had an excellent answer on that question. I was convinced before that we can compare Volero to Barcelona or Real Madrid, until he told me – No, we can be Atletico Madrid. I do not know football so good, so I accepted his position. This year is a special year. Volero have always been focused on CEV Champions League saying every time – We want to win it. But, during these 15 years since I have arrived in Volero, we played CEV Champions League maybe 11 years and we had only 2 times a real chance to win the competition. i am speaking about the last two years. In both occasions we were stopped by the team who was capable of winning the title that season.”

Mr. Jacobi stopped for a second, and then continued…

“On one side it was definitely a disappointment, as we believed that we could go all the way to the end. We have been playing this competition for 11 years and we have never reached the finals. But, on the other side you see various examples around you, like FC Chelsea who was trying for years to win the football Champions League. I would say it was just not the right time for Volero. Every time we would missing something as a team. We have never had the perfect situation, so we had to make adjustments. This year, for the first time I have the feeling that we are very good at each position and most importantly we are very good backed up at each position. I even do not want to use words such are back up or reserve, because you never know which player would be in the starting lineup and which one will be among the subs.”

Volero Zurich president believes that his team can win at least one major competition in the 2016/17 season.

“This season is different than the others as you have 3 major club’s competitions – CEV Champions League and 2 FIVB Club World Championships. I am quite realistic person. It might sound stupid, as realistic person would never do this (smile). But, as a realistic person I think that Volero absolutely deserve to take a place at the podium in the upcoming major competitions. I believe that we are able to win at least one gold medal. In which competition? It is not an important issue.”

The Swiss powerhouse does not have a real competition in the country. Therefore, many people believe it is a big disadvantage for the club when they face other European giants who are coming from the strong domestic leagues.

“Weakness of the Swiss League is not a new thing and it will not change. We will still be in the same situation in the years to come. But, when we take a look at all the leagues in Europe, the Swiss Championship is among the Top 10. The reality today show us that 3 out of 5 top leagues are weaker in comparison to the previous season. Today, if you ask me to describe you the league which Volero would see as a perfect environment I would say – the top part of the Turkish league. That’s all. Sooner or later the top teams of Europe will face the question – How to compete on a high level throughout the whole season. It is something that cannot be achieved on a domestic level. It is something that needs to be achieved on the other way.”

We asked Mr. Jacobi if he is speaking about something similar to Euroleague Basketball system in which top 16 teams from Europe are playing in a league format.

“If I would say yes, it would be a shot in the direction of CEV. I see the international professional volleyball league as a partner of CEV, in which the clubs and the CEV would be stakeholders. It would be a partnership in co-ownership.”

“To get back to the Swiss League. Of course that Volero had to adjust to the Swiss League and we all made a big progress. Still, the financial crisis that have affected all European countries did not avoid Switzerland. Yes, we have never had the best league, but it is difficult to maintain some high level. We even tried to implement the rule that two domestic players always have to be on court, but even through this regulation the difference between Volero and the other teams become bigger. We compensate this lack of high level games with hard training, as we have two strong teams in the roster.”

Stay with WorldofVolley as soon we will publish the 2nd part of the interview with Volero Zurich president Stav Jacobi.

KOR W: What do you have against...