Stav Jacobi for WoV (PART 2): Do you know which players Volero have never managed to sign?

Volero Zurich president Stav Jacobi gave a large interview for WorldofVolley in which he talked about many interesting things. Read the second part of the interview on our website... 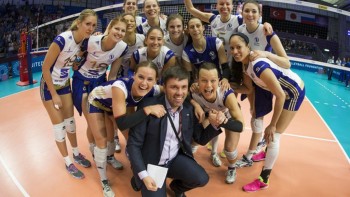 There are plenty of world-class volleyball players that have played for Volero Zuricb over the years, but we wanted to find out are there any players that the Swiss club just could not persuade to come to Zurich.

“When we entered the international volleyball market it was very difficult to convince players to come to Volero. Because, after playing in Italy or Russia they just did not want to come to Switzerland. I can tell you a few names which I was really eager to involve in our project, but I have never managed to complete that transfers. One of them is Lyubov Sokolova. We very close, but she eventually decided to go to Italy. We were also close to sign Małgorzata Glinka-Mogentale when she left Novara. She asked us to increase the offer… In that time I was not so keen on making a compromise, and she eventually signed with RC Cannes. You know, the thing is I have never wanted to make Volero players looking like dollars and ice. Simply because if you have that philosophy you can never win trophies. I also wanted to sign libero Fabi. We are really good friends and I wanted her to play in Volero. We were very close to make a deal, but finally she decided to stay in Brazil and I accepted her decision.”

For the end, we wanted to know what is the best moment the president of Volero has ever experienced while leading the Swiss team.

“Thank God you are not asking me about the worst moment, I could make a list (smile).  I think that the victory in the bronze medal match at the FIVB Women’s Club World Championship 2015 against Rexona was the best moment. Because it was the first international medal for Volero. After winning that medal I believe that we finally managed to break that barrier and I now I feel that all the roads are open for us.”

Read the 1st part of the interview with Mr. Stav Jacobi on the following LINK.