The Romanian team Remat ZALAU is going to play with some of the best Volleyball teams in Europe in the 2013 CEV Volleyball Champions League. They will play against: Arago de SETE, Bre Banca Lannutti CUNEO and Asseco Resovia RZESZOW. 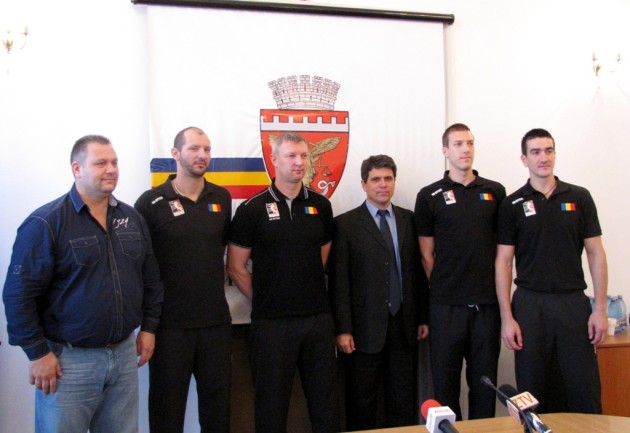 Two weeks before the home debut with the Italian guys from Cuneo, the leadership of Remat ZALAU gathered for a press conference at the Town Hall to present the team’s goals and players. The Romanian defending champions from Zalau aim to have a good start in the most prestigious Volleyball competition, in spite of a misfortune in the first match of the national league.

Remat’s line up has changed a bit from the previous season. Adrian Feher, Razvan Mihalcea, Andrei Stoian, Mihai Maries and Serban Pascan have prolonged their contracts with Remat. The surprise comeback of the summer is the Hungarian player Peter Nagy. Initially, Nagy signed a contract for the current season with MONTPELLIER Volley Université Club, but the French team broke his contract after he got injured. Peter Nagy is set to return to Romania these days despite the fact that he is still recovering from the injury. Moreover, three other foreigners joined the team: the Brazilians Robinson Dvoranen and Silmar de Almeida, and the American setter Jonathan Winder. From the Romanian championship, Remat transferred Mihai Gheorghita (who previously played for Unirea DEJ) and Fabian Birau (from Tomis CONSTANTA).

Another important aspect is the fact that Remat will play the home matches in the beautifully renewed local sports hall, which is ready to host some amazing matches and to welcome the players and their enthusiastic fans.

Radu Capilnasiu, the President of Remat ZALAU, said during the conference: “This third year in the Champions League is definitely a challenge for us. We know that it won’t be easy at all because our Pool is a very strong one. Three days ago, there was the official opening of our sports hall after a year of renewals, so we are ready to bring here our quests and fans”.

Mariusz Sordyl, the head coach of ZALAU, and Robinson Dvoranen, the leader of the team, seemed to be quite optimistic about the brand new start and promised that the local fans will be offered a great show. However, Sordyl emphasized that “the opponent teams are very competitive, so reaching a very good result might be difficult. Taking into consideration that the teams we are playing against are very strong, we will need the support of our fans, so I hope they will come in a very large number to attend the matches”.