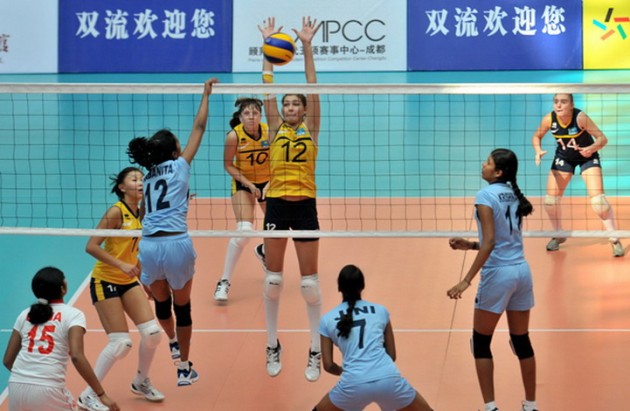 Friday’s match at the Shuangliu Sports Center featured a mighty Kazakh lineup while the Indian team persisted on defence. The Kazakh side powered off to a formidable opening set with their superb attacking from the left side. Gubaidullina helped power the Kazakhstan offense,  coming off with attacks at the middle where she is most formidable.

India retaliated in the second set, enhancing their defensive stance. They were able to check their opponents’ kills coming from the strong side. The Kazakh girls later committed a series of errors, failing to reduce their opponents’ momentum to equalise the match.

Steady service from the Indian side quickly provided them a 13-2 lead in the third set. Nabanita proved lethal with her attacks to sustain India’s offensive rhythm. The Indian defenders also challenged their opponents at the net, with successful deflections from Krishna. The Kazakh hitters later resorted to varying their angle and power in attacking which only led to misfires.  India’s Saroj sent  a huge kill down the middle to punctuate the third set.

Kazakhstan’s took a gallant stand to alter their predicament but they failed to control their error rate. As they tried to inch closer in the fourth set, they would then revert to their mistakes to award the points to their opponent. India’s Saroj sent a drop hot to the opponents’ court to finally settle the match.

India will face Thailand on Saturday, October 20 at 1300h to dispute the 5th spot in the tournament.