Justyna Lukasik and Magdalena Kuziak, 19 and 18 years of age respectively, joined Atom Trefl SOPOT right for the start of this season together with another promising player, Natalia Gajewska. Find the latest news from World Club Championship on worldofvolley.com. 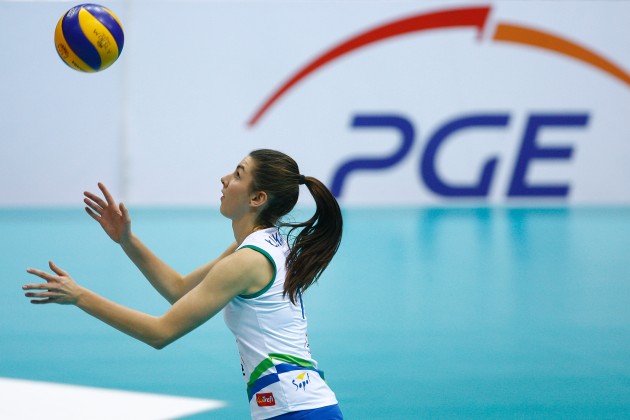 “This is a great opportunity even though we probably won’t have the chance to play that often” Kuziak had stated some months ago. “We want to learn as much as we can; it is a real honor to be able to work together with some real Volleyball stars as those included in the group of Atom Trefl”.

However, things changed quite quickly as the injuries suffered by Sylwia Wojcieska and Dorota Pykosz have opened the door for Lukasik and Kuziak to regularly get some playing time. Lukasik is actually part of the starting six in every game together with Yuliya Shelukhina. Kuziak has been working on her skills in reception and has improved significantly, thereby turning into the possible substitution for starting players such as Noris Cabrera.

“I haven’t changed my approach to the game but I certainly feel much more confident” says Justyna Lukasik. “I can control much better what I am doing out there on the court and know what I have to do. I take my lesson from every single match and my performance has improved day by day”.

Even though they are so young, they both already enjoyed the opportunity to join matches of the prestigious CEV Volleyball Champions League. “I can’t remember but was certainly happy to know that we were promoted to the Playoffs 12” stresses Kuziak. “I can say that my career just started here, with this club, so I am evidently pleased with our promotion to the knock-out phase”.

They also feel SOPOT can even make it to the Playoffs 6 even though their coming opponent, Vakifbank ISTANBUL, is a real pretender to the trophy. “It is a great feeling to have reached the Playoffs while being so young. I can join matches where some real Volleyball legends are standing on the other side of the court. I am extremely happy to compete at this level” concludes Kuziak.