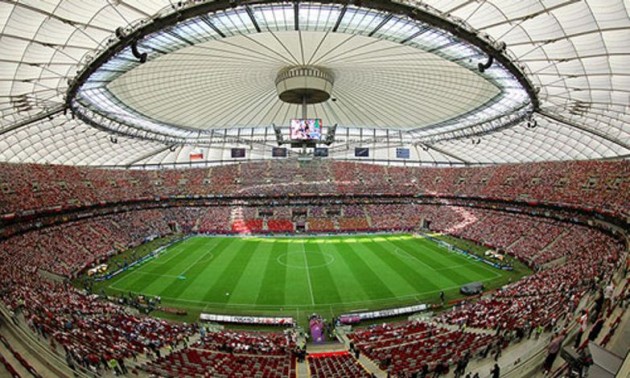 The idea is still in its formative stages and much research and many tests must be undertaken before the 58,500-seat stadium can be confirmed as a World League venue.

A initiator of the idea is Miroslaw Przedpelski the Polish Volleyball Federation president and the FIVB Vice-president responsible for marketing – “So far, it is only a loose project and we are obligated to see a lot of details, for instance, whether the wind will not be too strong and if the visibility is adequate. Obviously, it would be a fantastic show observed by about 60,000 thousand crowd. Next summer, we are going to play one World League match at the stadium so it will be a proper chance to do the test” – Miroslaw Przedpelski said a month ago.

The group inspected the stadium and its facilities to assess the viability of playing a volleyball match there.

“Organizing a volleyball match at the National Stadium is a great idea,” Andrea Anastasi commented. “It will be an amazing performance. I really want to play here, even though I realize it will not be an easy task from an organizational point of view. I like the stadium. We have been in the stands and the visibility is really good.”

The next step is to arrange a test match at the stadium, which could pave the way for the June Poland-Brazil match to be watched by around 60,000 spectators.

Poland’s National Stadium was completed in November 2011 and was used as a venue in the Euro 2012 football tournament. It also hosts theatre performances and rock concerts. The greatest advantage of the stadium is a mobile roof, hence, this sport arena can host a outdoor sports, but after closing the roof, an indoor sport events as well.