Damian Dacewicz spent nine seasons in the AZS Czestochowa. While playing for Czestochowa he was sent to the Polish national team and went to the XXVI Olympics Games in Atlanta. Damian Dacewicz was the center, and now is the second coach of white and green. This and other volleyball news read on Worldofvolley.com. 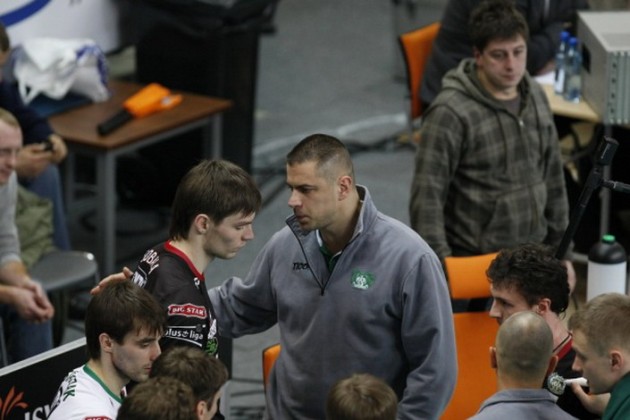 “I spent a total of nine years in the AZS Czestochowa  with a two-year break, when I had problems with my knees. I am very happy that I got a call from Andrew Szewiński, who was officially appointed to that invite individual players. I live and work in Czestochowa, so I can not imagine not taking part in the jubilee meeting”.

During the game you will have the chance not only to stand on the pitch and play a few sets, but most of all to meet some friends again after several years.

“This Sunday’s match will be a very nice event. You will be able to meet with the boys, with whom I played. Do not we all see each other every day. In addition, we will have the opportunity to thank the fans who over the years cheered us, keep they fingers crossed for us. Finally, we will meet again after several years. However, we will have a chance to remember after all these years, those wonderful moments in our careers and gained medals and titles for AZS Czestochowa. I hope that all guys from this decade will be able to take part in this celebration”.

In the 90’s you have hard-fought battles, among others with Kędzierzyn-Koźle. Since then, the league has changed a lot. Mainly changed the balance of power?

“In fact, once in the league there were two strong clubs. It is quite different now. In PlusLiga is a lot of good teams. In the 90’s we competed strongly with Kędzierzyn-Koźle. Once we won, losing once”.

For you, play a particularly important period in AZS Czestochowa falls on the end of the 90’s, especially in 1999, when club won the last Polish championship.

“Only now thinking about it, when we won the last medal for AZS Czestochowa I realize how much time has passed since that event. Coming to Czestochowa was a great move, I managed to get to one of the best clubs in Poland I must admit that I immediately wanted to show what I can do. I think the first season we came out pretty good, even though we were a young team. I’ll always be remembered that at that time there was much talk about Czestochowa“.

At that time, contracted young players, who – as shown by the time – were the strength of the Polish national team.

“It’s true. Authorities were able to pull the club Piotr Gruszka, Marcina Nowak, me, Robert Prygla, Mark Kwiecinski, the next season Andrzej Stelmach, Krzysztofa Śmigiela, Octavian Krzyzanowski, Fabian Matyja. It was a really nice group of young people. Before the season, no one knew how this team will be presented. We showed a very good side and in the first season we reached the bronze medal. I think that today would not be possible. Then, they were more opportunities to break it up. Do not forget, of course, the trainers, who led the team. They had the experience, know how to prepare a team, how to rip and deal with such a young team. Words of praise and thanks to Stanislav Gościniakowi and Adam Kowalski. This bronze medal started our good run. In the next season we won gold”.

Are you at the end of your sporting career once thought about it, to be a coach?

“Firstly I’d rather go down the floor more by choice than compulsion. I thought that the program guides for some time, but the knee was very heavily loaded and did not allow me to further professional game. I played professionally 18 years and although I do not consider that it is short, it is difficult to give up. Man learned all of this for several years, and when he learned to play at the highest level, it appears that you need to stop playing. Suddenly one day it turns out that what you have learned you might not have to do anything useful. In my case it turned out that it is not so. I received an offer from Wielun. I think I used it a hundred percent during each season spent there. So far for me, everything is going well and I hope it was so on”.

Are you little envy David Murek and Andrew Stelmach that they are playing, and you’re not?

“I am jealous, but it’s a healthy jealousy. I envy them because they can get off the field more out of choice than compulsion. They will decide when to stop playing. I did not have that choice. They can play and I hope you and Andrzej Stelmach and David Murek will continue to help us direct on the pitch to play a next opponents”.