Serbian wing-spiker Nikola Kovacevic is one of the players who joined Asseco Resovia RZESZOW before the start of this season. Voted “Best Receiver” as Serbia seized gold at last year’s CEV Volleyball European Championship in Vienna. 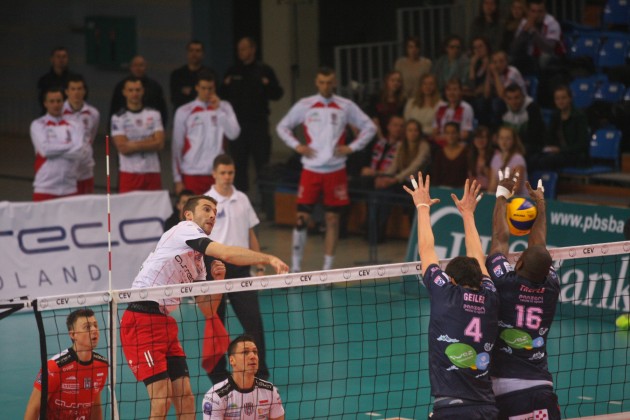 Nikola, you joined Asseco Resovia RZESZOW quite exhausted after a difficult summer for your national team and you were struggling with a shoulder injury. However, in the last few weeks you’ve been playing more and more; have you finally overcome your problems?

First of all, it’s been really a long season for me with the national team that lasted for almost six months without any break. After the Olympic Games I had finally around 15-20 days off that I exploited to rest and recover. If I look at the last few years of my career I had only a very few days to rest due to my commitments with the club and the national team respectively. This year was even more difficult for me and I felt very tired. When I came to Rzeszow and joined training with my new team I had problems with my shoulder, knee and back. I wasn’t able to be at the same level of my teammates who had started regular practices at the beginning of August. I needed more time to recover and be ready for full practices. Now I feel ok and it’s getting better as far as my level of play is concerned. I mean, every player would like to be in a good shape for the whole season but I don’t think it’s possible. It’s normal that we have better and worse periods because we are not machines.

In those games in which you were playing so far it was visible that you felt good in attack, block or service but you were struggling a bit in reception which is probably the weakest fundamental for RZESZOW at the moment.

It’s a result of many factors. I noticed that we had many problems even after the service of opponents that are usually not so strong in this fundamental. When we are not able to pass the ball after a good reception we complicate the game because our opponents become more confident in service, they are risking and their third or fourth service then could be very powerful. In my opinion we missed too many balls after good reception and that was the first step to our difficulties. Sometimes we had also communication problems in reception but that’s part of the game and we should work on that.

What’s the main reason motivating why Asseco Resovia – defending Polish champions – has so many problems to score points in the Polish League? RZESZOW is currently in fifth place with a gap of eight points from the leaders.

At the beginning of the season we had problems with the injuries of some players including me. It had also an impact on our practices because we couldn’t work all together on our system of play. The other thing was that in the first games of the season we went through ups and downs because we started each match with a different line-up. With so many changes in the roster it was difficult for us to get the right consistency. Later on we had a lot of games and travels which meant no time for practice or rest. It’s difficult to have enough power during the game when the travel in a bus lasts for 8 or even 13 hours like our trip to Zalau for the Champions League. It’s also clear that our opponents want to beat us because we are the defending champions. Thus there are many factors explaining our disappointing results up to this moment but generally we have a really good team that has the potential to play better. So far we missed some points in the league but I think that in this period after the Christmas break we will reduce the gap in the standings and get everything back.

How important is for you to play in the starting six taking into account that Asseco Resovia has a very wide and balanced roster with many players on the same position who are ready to play?

When I signed my contract I heard that we were going to have 12 players who could all play. In my opinion in that situation there is only one solution – those who are currently in the best condition and feel ok should play. The other thing is that the players don’t decide about the line-up. It’s our coach’s job and he should make the best choices for our team. Obviously as a player I want to play every game but it’s also my duty to accept the decisions of our head coach and I have no problems with that.

Starting from your experience from the Italian and Russian league, which peculiarities have you noticed in the PlusLiga, what’s different in Poland?

It’s clear that Volleyball is one of the most popular disciplines here. We can play in a full gym almost everywhere. There are many supporters and that’s really impressive. For us, players, it’s really nice to play in front of many cheerful fans and that wasn’t always the case in Italy or Russia.

Are you surprised that the Polish League is so competitive and demanding?

It’s clear that nowadays almost everybody plays good Volleyball, so this does not happen only in Italy, Russia or Serbia. There are many players from different countries and a lot of good teams in Europe. In Poland there are also many good teams and you have to play at your best if you want to win. Our team even lost at home to the team standing at the bottom of the rankings and that was a big surprise but this means you really have to play your best, otherwise you may lose to anyone.

Which are your impressions after the Drawing of Lots for the Playoffs 12 of the 2013 CEV Volleyball Champions League, how do you see the chances of Asseco Resovia against the reigning Italian champions of Lube Banca Marche MACERATA?

I think it’s not such a bad opponent considering the fact that we could have been drawn to play TRENTINO or Zenit KAZAN. We’ve heard about some injuries in Lube Banca. They are not invincible and if we play our best we have chances against them. It will be nice for me to meet my teammates from Serbia’s national team who play in Macerata like Dragan Stankovic, Marko Podrascanin, Sasa Starovic and to compete with them.

Have you heard that in the last few years Asseco Resovia didn’t win a single game against Italian teams in the European Cups?

I did not know this but I think that it’s time to stop this negative streak. The most important thing for us is to play well because otherwise we will lose for sure. It all depends on us, if we play at 100% of our potential we have good chances to win.