On Tuesday morning Atom Trefl SOPOT flew to Istanbul to play there Vakifbank in the second round of the Playoffs 12. As they were preparing for that clash, the club launched a special contest for the best slogan to support the girls in their quest for a spot in the Playoffs 6 of Europe’s most elitist competition. This and other volleyball news read on Worldofvolley.com. 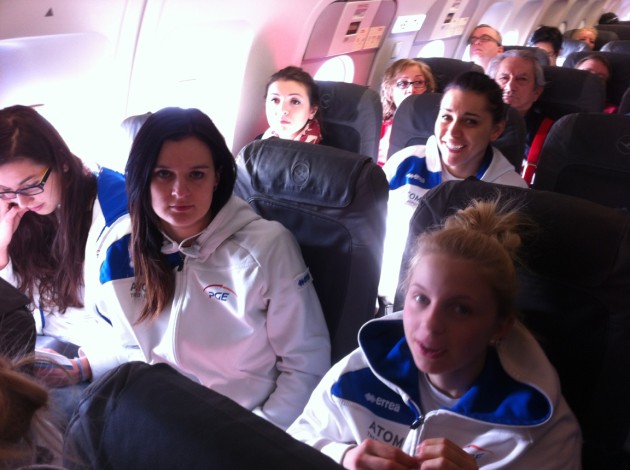 A lady named Agnieszka eventually won by proposing her motto “With passion for success” but she was finally awarded a jerseys signed by Malgorzata Glinka-Mogentale, while the first prize – a trip to Istanbul for that away match – went to the second-placed in this contest, a sir named Jacek, since the winner did not have a valid passport to travel to Turkey.

“To be honest I did not think I could stand a chance; my son has been always very lucky in such contests and I thought it was his turn, but eventually I got that prize” says the runner-up who was eventually moved up to first place. He could eventually get some days off from his job and travel to Istanbul to cheer there on the “Atomic girls”. “We have been following and supporting the team for the past couple of years and it was my son who pushed me to join the contest”.

This will be the first time Jacek is in attendance for an away game of the European Cups. “I believe this will be a tough game but I am also convinced that our disappointing performance in the national league with Impel WROCLAW belongs to the past” he stresses. His favorite players are Justyna Lukasik, libero Mariola Zenik and Australian Rachel Rourke. “I also believe that Anna Podolec is playing better and better as the season progresses. I remember she was part of the national team back in those glorious days and I hope she will join it once more, possibly together with Glinka”. Jacek and his son will be staying at the same hotel of the team, get to share training sessions and meals as well as a sightseeing tour of Turkey’s megalopolis.