Karpaty Krosno, newly promoted member of Polish first division completing the composition of the team. Signing of Paula Słonecka will be the final reinforcement for the Subcarpathian club, which is currently in Slovakia, where they will play the first control match under the command of Dominik Stanisławczyk. 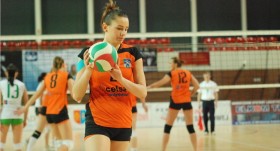 “We already came to terms with Słonecka. We have to do the formalities relating to signing the contract, but certainly she will be our player,” said Andrzej Hojnor, president of Karpaty.

Słonecka is pupil of Biała Podlaska. Then she played in Tomasovia Tomaszów Lubelski and for the last two seasons she defended the colors of first division team Ostrowiec Świętokrzyski and Toruń.

Currently, Dominik Stanisławczyk’s team is staying at a camp in Slovakia, and they have plans to play two sparrings. In early September, newly promoted Polish first division team will take part in a friendly tournament in Proszowice. On 13-14 September they likely will go to Mysłowice to play two matches, one with one of the ORLEN league teams and the other one with the club from the Second division. The plans of Krosno are also to have control duels on home soil, but the details are not known yet.