The match of Pool E in the CEV Champions League in Poland was marked as derby of the day and it justified that label. The guests from Italy, Cucine Lube Banca Marche Civitanova, downed PGE Skra Bełchatów 3-1 (30-28, 18-25, 25-21, 25-20) and claimed top spot in the pool as the only team with 2-0 record. One thing might spoil the joy of big win, an injury of libero Jenia Grebennikov which he suffered at start of Set 4. Juantorena topped game scorers with 21. Conte had 17 points in Skra. 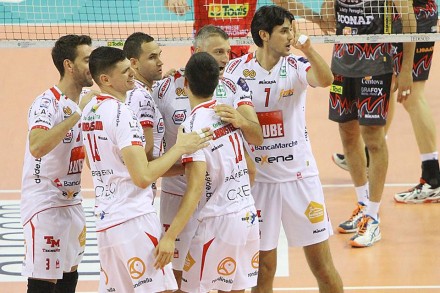 Lube nearly spilled everything good that thay made in most of Set 1. Their setter Christenson insisted on Juantorena in attack and it paid off to Italian team which had comfortable lead at both technical time-outs 8-5 and 16-9.  On the other side, Wlazły was cut off, but Skra returned in the game by perfect blocking, especially on Miljković, and leveled 24-24. Still, Lube converted sixth set ball by, who else than, Juantorena 30-28.

Polish team learned their lesson and didn’t allow opponents to go up front at start of Set 2. Skra’s players anticipated Christenson’s settings well and were easily putting double and triple blocks together. It resulted with a huge 12-8 lead. Skra even enlarged it to unattainable 19-11, but with a small ’assistance’ of referees who committed two huge mistakes at the expense of Lube in the moments when they could catch up. Error by Fei, who replaced Miljković, gave Skra equalizer 25-18.

Skra had very intense start of Set 3 and gained two-point lead 13-11. Series of serves from Miljković silenced home fans and Lube took over lead 14-13. Skra’s setter Uriarte involved his middle blockers Kłos and Wrona a lot in the second half of the set, while on the other side, Čebulj was a key figure. He scored 3 points in a row at 21-21 while Stanković’s block completed 4-0 run of Lube 25-21!

Lube’s libero Grebennikov suffered a right knee injury at 1-1 in Set 4 and it totally disturbed players of Italian team. Since they arrived to Poland without the second libero, outside hitter Parodi took Grebennikov’s role. Skra took advantage of the situation, especially through Conte, 7-3. Soon, Lube’s players got a grip and equalized 7-7. And not only that. They reached, it turned out, a decisive five-point lead 13-8 (with 5-0 run)! Gromadowski returned uncertainty in the match with two consecutive aces 14-12. Miljković reminded on his top performances when he was younger while Juantorena was flawless 22-19. Players of both teams were unfocused in the finish, but that situation went into favor of Lube who converted their first match ball 25-20.