It supposed to be a fierce battle of the two Italian giants in semifinals of the CEV Champions League, but Diatec Trentino did what many fans in Kraków’s „Tauron Arena“ certainly did not expect. They smash Cucine Lube Banca Marche Civitanova into pieces 3-0 (25-19, 25-10, 25-18)! 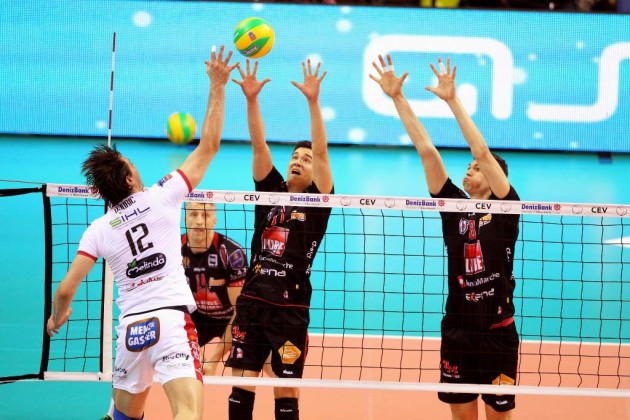 Trentino’s players were playing like they were in a trance and had the answer on each attempt of rivals. But, those attempts were weak in most cases… Simply, nothing worked properly in Lube, not a single segment of a play. On the other side, Mitar Djurić (15 points), Tine Urnaut & Co. were perfect. In Lube, Osmany Juantorena was the only player with double digits, 10 points.

Read play by play coverage of the match:

21-13 Everything, absolutely everything works for Trentino. Tough ball for Djuric but no problem for the Greek

13-6 Blengini forced to call time-out to shake up his players. The final is slipping away from them.

12-6 Nothing works out in Lube. Christenson steps on rival’s side while setting.

9-4 Podrascanin sends quick attack out of bounds. There’s no energy in Lube’s players…

8-3 Another challenge by Lube whose play is totally confused at the moment. They absolutely have no attack… And point for Trentino!

6-3 For the first time in this match Trentino get lead in early stage of a set, libero Colaci scores from a save! Interesting situation afterwards. Lube’s coach Blengini asks challenge to see if ball touched the ground before Colaci’s save, but it was not covered by slowmotion!

3-3 Djuric sends serve out of bounds

17-12 Juantorena touches net… What a pitty for Trentino to return to the match!

13-8 Are we looking at rerun of Set 1? Trentino again get comfortable gap! Djuric converts counter attack after great leg save by Giannelli

10-8 If Lube didn’t take two-point lead, but Trentino did!

1-1 What will the second set bring?

16-13 What a block by Trentino, Juantorena can’t go through, the second TTO!

10-10 All tied! Sole with monstrous 1st tempo, time-out by Blengini

6-8 Two blocks in a row by Sole, Trentino are back!

3-8 Horrible start of Trentino! Cebulj sends both teams to the first TTO with strong spike