ECJ M: Serbia back on track with 3:1 win over Finland

After two shocking defeats in straight sets to Belgium and Russia, Serbia finally got back on track claiming their first win at the final round of the 2012 CEV Junior Volleyball European Championship on Monday beating Finland 3:1 (26-24, 25-10, 14-25, and 25-21). With this result the doors for the semis are not totally closed but Serbia will have to score some more positive results after the day of rest on Tuesday. 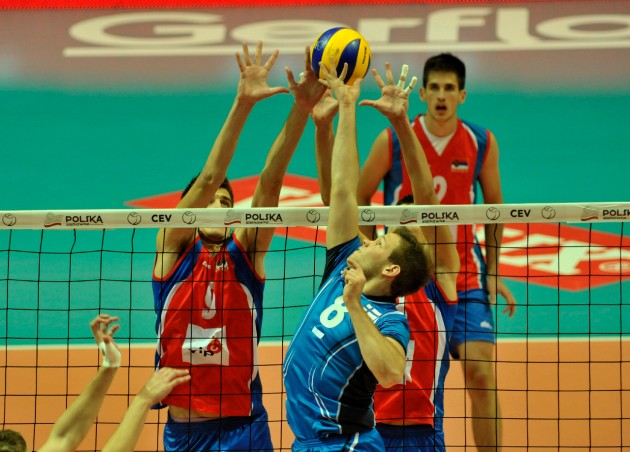 This match was the last call also for Finland that had also lost two matches and the “Suomis” opened with a good pace (7:2), before Serbian star Uros Kovacevic finally found his way into the game (8:6). Serbia eventually flipped the score around going up 12:11 and gradually opened the gap well powered by Kovacevic (20:15). Some mistakes by the Serbian defense line helped Finland come closer in the score (20:18) and after a tie at 22, Sinisa Zarkovic finished it off at 26-24.

Serbia started out strong also in set 2 (8:6, 10:6) and with their great spikes and blocks the “Plavi” were able to sail away (16:7); on the other side of the net, Finland was all mistakes and a block by Aleksandar Okolic contributed the final, impressive 25-10.

Finland knew they had nothing but to go for a mission impossible in set 3 and they eventually surprised their opponents with good blocks to go to the front (10:6, 14:8); Tommi Siirilä was particularly effective for the Finns and the “Suomis” ultimately cruised to a 25-14 that totally reversed the outcome of the previous set.

The Finns stretched that momentum also to the early phases of the fourth set (7:3) before Serbia clawed back and went ahead in the score with a spike by Kovacevic (14:12). Elviss Krastins scored three for Finland to make it 16:15 for his opponents at the second technical time-out but after that Serbia changed the pace with Brdovic, Kovacevic and Stankovic going for the 25-21 that sealed their 3-1 win.

PER: Peru starts down the road to Rio 2016 with a new guide: Brazilian coach Jose Francisco Dos Santos