CEV CL M: Zenit KAZAN downs Dinamo once more to go for another derby in the semis

By scoring a second consecutive 3:0 victory over their compatriots of Dinamo MOSCOW, last year’s winners of Zenit KAZAN got the right to partake in the final four of the 2013 CEV Volleyball Champions League scheduled for March 16-17. Read latest volleyball news on Worldofvolley.com. 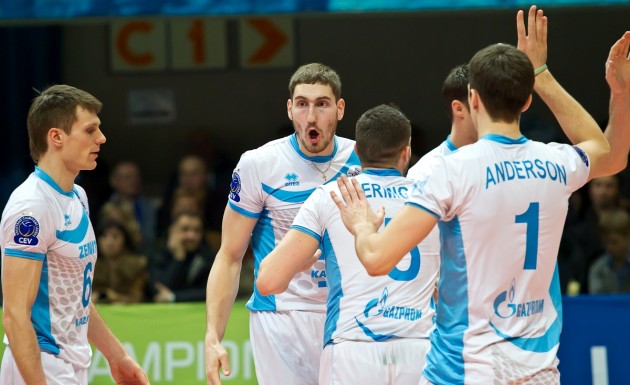 The start of the game was very close with Zenit and Dinamo leading with the slimmest margin by the first and second technical time-out respectively. Though Zenit attempted to accelerate the pace, Dinamo responded well and could even the score. As his guys were trailing 18:20 after a block by US American Matthew Anderson, Dinamo head coach Yuri Cherednik asked for a break and his side was close to even the score (22:23) before a mistake by Bartosz Kurek in reception contributed two set balls for the guests from Tatarstan. Alexander Markin could score the next rally but the second opportunity was cashed by Zenit superstar Maxim Mikhaylov with an attack from the back row (23-25).

Zenit then imposed its rule right by the early phases of the second set similarly to what the Tatars had done last week in Kazan. They went up 6:2 on good serving by Alexander Abrosimov before a time-out asked by Cherednik and the serves by Alexander Krivets could help Dinamo reduce the gap (6:8). Though the Muscovites were trying hard to re-open the fate of the game, they made a way too many mistakes and Zenit could move to the front by five points. KAZAN did never look back and quite significantly it was a mistake by Dinamo wing spiker Leonid Shchadilov that sealed the 18-25 for Zenit.

Dinamo went for a make-or-break bout in set 3 and eventually caught a good start (7:4) as Leonid Shchadilov had found the right consistency after replacing Kurek. However, Dinamo could not keep that lead as Zenit fired back powered by good serving contributed by Evgeny Sivozhelez. As the score stood at 18 all, Zenit claimed the next three points helped by three errors of the Muscovites and even two late time-outs asked by Cherednik could not avoid a straight-set defeat, the second in about one week (22-25).

The Serbian player has been deported from...