Sunday's meeting between Russia and Italy in FIVB World League 2013 - Group B, provided the fans a lot of emotions, not just sporting. 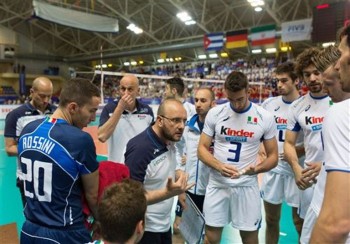 Controversies have already appeared in the first set, and the most debatable was the last point of the first set when the referees “did not notice” that Alexey Spiridonov was stepping his third meter line when he was attacking and wrote down a point on Russians account, making Voronkov’s proteges to win the set.

Atmosphere has not improved in the second set, which begun with great discussion under the net and reciprocal “challenges”. Finally, the action moved to the trainers – Mauro Berruto and Andrey Voronkov exchanged a few “friendly” words.

Since then, there were constantly “sparks” on the net. Players of both teams threw the deep looks through the net, there was no lack of joy shouts directed to “the other side” following discussion with the referees.

Gilles Gaupp, French referee running the game, just did not react to the behavior of players. Only on the set ball for the Russians in the third set he found that Dragan Travica and Alexey Spiridonov crossed the line of good behavior, and he showed both of them the yellow card.

In the last two sets was just a little calmer. Later, the events from the field have moved on to the post-match conference and interviews with the players and coaches.

“I would like to congratulate the Russian team. It was a very good meeting. I respect Russian players, I respect their country. However, I do not respect a man sitting at the table (referring to Andrey Voronkov) and I’m not going to stay next to a man who insults me,“ said Mauro Berruto, then left the press conference.

Russian coach, Andrey Voronkov, asserted that he has no idea what Berruto meant. “This man is related to the volleyball for long time, he has some methods to influence people and a diploma in psychology. The Italians wanted to get as many points in tha match with our team, sometimes using different deceptive tricks. On my part, there were no insults, “ he explained.

His opinion was supported by Russian player, Alexey Spiridonov. “The coach of the Italian team behaved outrageously. The man is a lunatic, if anyone wants to ask me. He walks very emotionally and practically arguing all the time. Even when the challenge system showed that we were right, Berruto still insisted on his own.“

WCHJ W: Japan came back from 0-2 but Serbia held their nerves